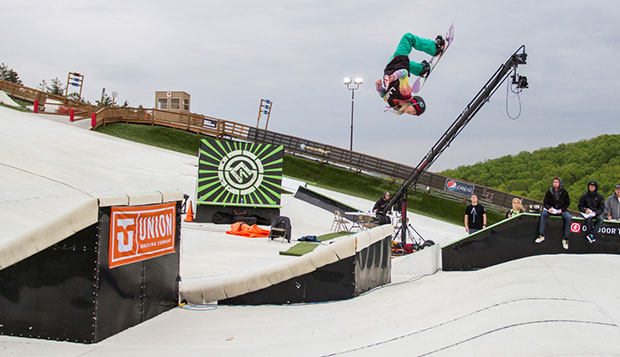 Jon Steltzer, a former and future ski and snowboard team member, finished first in the Ski Rail Jam and second in the Ski Big Air contest, while his older brother, Flames junior Tim Steltzer, was second on the rail and third in the air.

"That was the second time I've ever won a rail jam," said Jon Steltzer, who earned $3,000 in prize money between the two events. "I used to not even compete on rails at all, but I'm trying to even out my skiing a little bit more."

In the Big Air competition, he just missed landing a switched-up double rodeo with a 1080-degree rotation.

"It's two flips while spinning three times," Steltzer said. "I landed it in the run before and the second time I couldn't get it."

That allowed Connor Tatom, a sophomore at nearby E.C. Glass High School who the Steltzer brothers coached, to take the Big Air title.

"He's going out West for school and, hopefully, we see him in the (Winter) X-Games in a couple years," said Jon Steltzer, who is considering going on the Dew Tour next season. "This is definitely the best part of my year. This competition is the most fun day, for sure."

He and Tim have developed a healthy sibling rivalry at Snowflex.

"We've been competing for three years, going back and forth," Jon Steltzer said.

Zack Bukolt, a Liberty graduate and former member of the snowboarding team, advanced to the Big Air finals against Ben Sullo after landing a double backflip in the semifinals. He did it again on his last jump, only with a slight hand drag, which opened the door for Sullo.

The Bristol, Vt., native who now lives in Lynchburg got tremendous altitude on his final run, completing three complete mid-air twists in about three seconds of hang time.

It was the first time he had landed a backside 1080 in competition.

"Definitely, it's like flying," said Sullo, who felt he needed the big stunt to take the $2,000 first-place prize. "I've got to say, this is one of the best contests I've ever had. I'm stoked."

"It was a great competition," added Liberty head coach Will Scheren, who announced the events alongside former U.S. Olympic snowboarder and Amazing Race contestant Andy Finch. "Everything was so close in the top eight. It was just a great night, overall."

Ryan Leeds, a graduate student and former club rider at Liberty, placed third in the Rail Jam behind Luke Fosse, who also took third in the Big Air, and pro rider Ryan Paul.

"I love snowboarding and I love the Dew Games," Woody said. "This is like the biggest thing of the year. It's always a lot of fun."

Jordan Cummings, another Liberty student, was runner-up to Longfield in the Rail Jam.