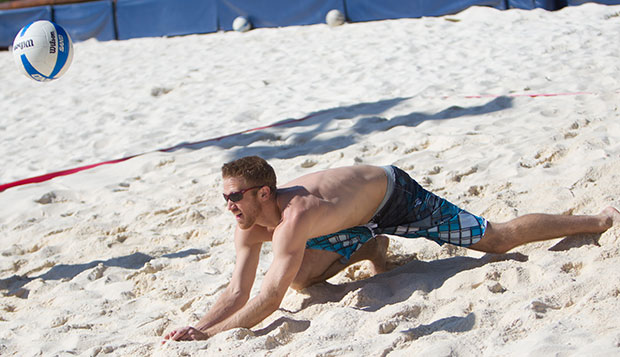 Kevin Snyder, a first-year graduate student who previously competed in the high jump at Oklahoma, dives to make a dig save in practice with teammate Ethan Chase.

"For the first tournament that we've ever had or hosted at Liberty, it was phenomenal," Flames head coach Drew Sherwood said. "Everybody had great feedback, with no complaints. Our goal is to try to build from here and get more colleges involved, get the contest bigger and improve on our ability of playing as well."

Liberty sophomores Joel Marselus and David Hong upset the Flames' top tandem of Ryan Culkin and Mike Morrison in the men's semifinals, 25-20, before Liberty graduate students Ethan Chase and Kevin Snyder swept Marselus and Hong, 21-18, 21-14, in a pool play rematch in the final.

"They're a great team and we knew we just had to get out there and jump on them early," said Snyder, who was a high jumper at the University of Oklahoma before starting his graduate studies in sports management at Liberty this year. "This is Ethan and my first tournament (so) it was good to have this experience.

"I really didn't really know what to expect," he added. "I was really excited to come out. We wanted to have a good showing and it was great to compete in front of the home crowd. It's been fun."

The duo faced a team from Navy in pool play, which gave it a good warm-up test.

"They had a really good hitter and a really good defensive specialist that were playing really scrappy," Snyder said. "We didn't really come out well in the beginning and dug ourselves into a hole and just had to continue to work hard to get back into it."

They are new to the beach game — Chase also plays right-side hitter for the Flames' indoor volleyball team — but the two left-handers showcased excellent teamwork and athleticism to outplay their opponents.

"We just complement each other well," Snyder said. "I like that he's on the right side and I'm on the left and I've been working on hitting both hands just to expand my game."

Both realize they will have to raise the level of their games to stay competitive when they get to events such as the May 18 Southeast Regional qualifier at Wilmington, N.C., the June 8-9 Northeast Regional Championships in Long Beach, N.Y., and the July 13 Virginia Beach Open.

"We're just taking this year as more of a learning curve," Chase said. "We've got a long way to go."

"We've still got a lot of learning and a lot of practice, and we're eager to do both," Snyder added.

"It was good because, even though it wasn't a straight-up college tournament, we still had a lot of really good teams show up," he said. "It gave us perspective of what's out there because everybody has a different style of playing. This had a wide range of older, wiser players and younger, more aggressive players who are good on their feet."

In the women's bracket, Lara Bartolomeo and Rachel Willis, who played indoor volleyball at Liberty from 2004 through 2006, teamed up to beat the Lady Flames' current No. 1 beach pair of senior Sarah Gogerty and sophomore Tinsley Zentmeyer, 21-9, 21-18.

"This was our first sand tournament, but we come out and play here together over the summer," said Bartholomew, noting both players grew up in California, but played more indoor than beach volleyball there.