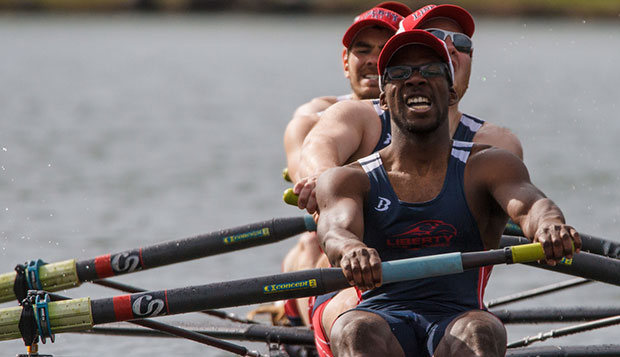 The Flames varsity four got a rematch with the Hokies in a dual meet held Saturday at Ivy Lake in Bedford County and made the most of it, winning both races in a best-of-three contest to help Liberty come out on top in the team competition.

"Virginia Tech is our closest rival so we were really happy to see them again and we knocked them out, 2-0," Flames team captain Connor Houston said. "They actually had us by a lot more last week, but we sprinted really well and we almost caught them. But you really can't live in the almost world or you're never going to get anywhere. You have to do it."

This time, Liberty got out to a faster start in the 1,000-meter race, half the distance of typical spring championship regattas, and held on.

"It's controlled chaos, that's what we like to call it," Mitch Dieurdonne, Houston's crewmate on the men's varsity four, said of the shorter race course. "It's kind of like an all-out sprint. There's no buoys out there so there are no lanes, so, really, it's fair game. Usually, you get through that first 1,000 and you start to build pressure and to fight for that last 1,000."

Dieurdonne said crew is more strenuous a sport than it appears from the shore, as much physical labor and painful exertion is required to make the boast glide gracefully across the water.

"A lot of people don't understand, but it's an extremely painful sport," he said. "It's basically just a big old pain contest, and when you've got crews like Virginia Tech who are fast, they're good, they're equally matched against us, it's really all about who's willing to push through the last little bit of the race and really put the power on the water, even with all the burning sensation in your legs."

He said getting out to a fast start was critical.

"My four came out really quickly off the line," Dieurdonne said. "Trying to build the power and drive through Virginia Tech is easier than making a comeback and beating them. Most of our boats do better holding the first-place position rather than coming back from second place and winning."

Liberty used the same tactics to win the majority of Saturday's races, with spectators treated to plenty of tight finishes in the untimed event that served as a tune-up for the women's lightweight four and novice four teams before traveling to the May 11-12 Dad Vail Regatta in Philadelphia and the men's lightweight four and varsity four boats before going to for the American Collegiate Rowing Association national championships, May 25-26 in Gainesville, Ga.

"Virginia Tech is a really good rival because we're so evenly matched out there on the water," said Houston, who won't be able to row at club nationals as he is spending the summer in Israel. "I think there was one kind of open-gap race that wasn't very close, but I think on the men's side, every single race was really close."

Liberty head coach Ryan Hurley, who up until this year coached Virginia Tech's crew team, was pleased to see such a good fan support for the small-scale meet, the Flames' only home event of the semester on the lake where they practice at dawn five times a week.

"The fact that it actually drew a crowd is really cool, because any home race we've raced at any other event, you don't get that," he said. "It's great to see the support from people who aren't even rowers, just to come out and watch.

"Dual meets are a little more laid back," he added, noting the sunny skies and ideal conditions made the day even more spectator-friendly." You get some good, hard racing but there's also an air of fun about it. You don't have the tension of the large regattas."

The Lady Flames' freshman four and lightweight four swept their races against the Hokies, with the women's lightweight four overcoming an early deficit to prevail against Virginia Tech's varsity four and Liberty's novice four.

"(Tech's) heavyweights have probably 20 pounds on each of us and we beat them by just a few seconds," Liberty's Abby Lenz said. "The novice four was in our varsity four race because they're really good this year. They're almost at a varsity level, they're doing so well. They've got three years to build on what they have now, so they're headed in a really good direction."

"We've hoping to make a name for ourselves," Lenz said. "We've never actually made it out of our heats at Dad Vails because it's a lot of NCAA teams so we're hoping to at least make it out of heats this year, and go on to Day 2."