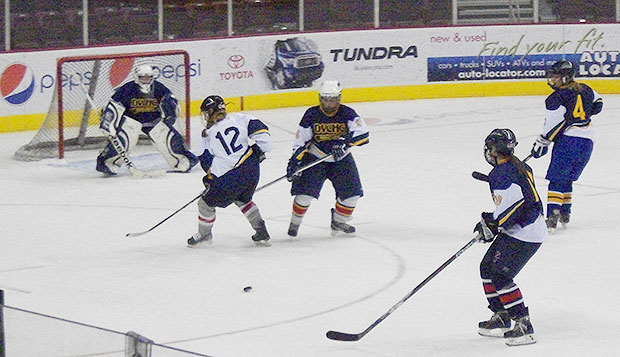 Leanne Niemi played in goal and Rena Leone on defense for the Lady Flames in Sunday's Delaware Valley Collegiate Hockey Conference All-Star Game at The Giant Center in Hershey, Pa.

Leanne Niemi made nearly 700 saves for Liberty University's ACHA Division II women's hockey team this past season and ranked in the top three in the Delaware Valley Collegiate Hockey Conference with a 0.909 goals-against average.

That earned her a return trip to Sunday's DVCHC All-Star Game at The Giant Center in Hershey, Pa., where she was joined by senior Rena Leone, a converted forward who was both the Lady Flames' points leader and top defenseman this season.

"It was a good weekend," said Liberty first-year head coach Sara Niemi, Leanne's older sister who played goalie from the age of 5 in Canada before shifting to defenseman upon joining the Lady Flames in 2006. "The girls did great. Leanne played the first half of the game and then they rotated goalies. Rena played on Leanne's team as one of four defenseman and they rotated every other shift, so they both got a lot of ice time."

Liberty also had three representatives in the preceding New-Stars Game, a short exhibition featuring players who learned the game upon arrival in college. They were freshman forwards Margaret Poit and Victoria Sears and sophomore forward Kaitlyn Nelson.

"Margaret Poit has been the most dedicated player this year," Sara Niemi said. "Margaret has been a great addition to the team as she is always willing to learn and always improving her game."

She was equally complimentary of Sears and Nelson.

"Victoria Sears joined the team in January and having never played before she has developed into a great skater and positional player over the last few months," Sara Niemi said. "Kaitlyn Nelson also joined the team in January. She has been very dedicated to improving her skating and hockey skills and continually asks for more ice time. I am very excited to have all of these players returning to our team next season."

Liberty also was presented with a DVCHC banner in between the All-Star events, recognizing the Lady Flames' first season and DVCHC league implementation in 2010.