Flames outdueled in OT by Northeastern in national rematch 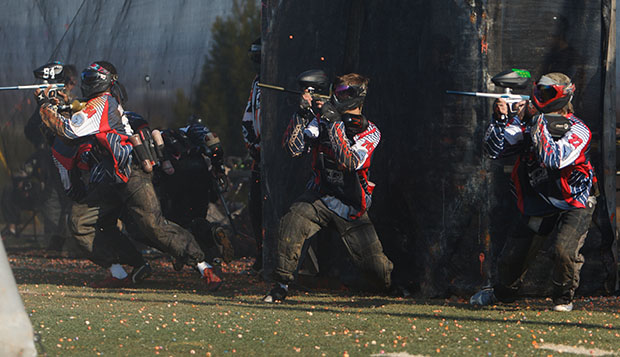 Overtime elimination by Northeastern in Saturday's round of 12 finalists was a considerably more respectable way to go out of the 14th annual National Collegiate Paintball Association championship tournament for Liberty University's Class A Red team than the way it started, with a 15-1 loss to Florida Gulf Coast University on Friday.

"We were slaughtered," Flames head coach Todd Hoglund said of the first-match loss to FGCU, which had a bit of a home-field advantage for the tournament in Lakeland, Fla. "Everything that we tried to battle what they were throwing at us, we couldn't find a good counterattack response. They were winning their gun fights, manning us out."

After all but conceding defeat in the second half of that matchup against the Eagles, one of the tournament favorites along with defending champion Cal State-Long Beach, Liberty refused to go down without a fight in its final three skirmishes, beating Northeastern 5-4 and Temple 8-3 on Friday before losing to the Huskies in Saturday morning's rematch, 4-3 in OT.

The strategy that worked against Northeastern on Friday wasn't as effective in Saturday's elimination match.

"The first time we played them, we were able to break out wide," Hoglund said. "They adjusted (in Saturday's rematch) when they were able to shoot us out of our snakeside. In the final overtime, they were able to get the numbers advantage on us and we couldn't  come back. It was a hard-fought game, but it didn't pan out for us."

He said the Flames had the stamina to compete on the national stage.

"They were in pretty good physical condition, and knew we were going to have to work hard," Hoglund said. "Nobody got real winded. Conditioning wasn't a factor, and neither was the heat. Everybody played solid, played as a team."

Overall the tournament was a good experience for Liberty (7-5), which graduated nearly all of its first-line starters from the past two years, when it posted back-to-back fourth-place finishes at nationals.

"We had some good moments and some bad moments," Hoglund said. "It was really a rebuilding year. We're just doing what we can with what we got. For some of these guys, it definitely was a learning experience, their first time playing for and starting on the Class A (Red squad)."

He is optimistic about the future of the program, especially with the up-and-coming players he has to work with and the fact that none of them are graduating. Continuity will be a key to developing a successful team, like Florida Gulf Coast's, which has been playing together since 2007.

"A lot of our guys, like Jeremy Miller, being a new player this semester, it takes some time to build that relationship on the field," Hoglund said, noting he could potentially play for the next four years due to his major.

Liberty's less battle-tested players, from the Blue and White teams, competed in the Class AA division at nationals. However, they didn't fare as well against competition they had faced before, losing to Lynchburg College, East Carolina, Embry Riddle, and Georgia State to finish 0-4 and place 35th out of 39 teams.