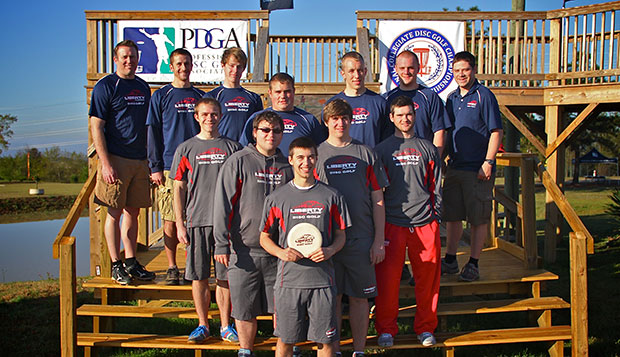 Liberty University head coach Steve Bowman says there are some similarities between disc golf and basketball, especially when there's the added pressure of playing as part of a team.

"Like in basketball, the basket gets smaller and smaller when you start missing," he said. "As in any sport, if you get off just a little bit, it's hard to recover sometimes. If you miss a few, you start tightening up and things get a little wayward."

While competing in the National Collegiate Disc Golf Championships, the sport's equivalent of March Madness held last Wednesday through Sunday at the Hippodrome Disc Golf Complex in North Augusta, S.C., the Flames found those comparisons to be true.

Liberty placed 30th out of 40 teams in the championship field at 8-under 544 through five rounds of singles and doubles play and didn't make the 20-team cut to advance to Sunday's finals.

"We were never really in the major hunt," Bowman said. "We kind of just stayed still and we got passed by other teams."

"We knew where we should have been and the guys on the championship course knew what they had to shoot, as individuals, to make all-American," Bowman said concerning Saturday's two rounds of singles play. "They shot above what they typically do and just missed their lines, couldn't put it where they needed to. It was an unfortunate day. It happens, and they couldn't recover from it."

Lance Brown had the lowest single-round score with his 60 in the second round after Tyler Andrick came up from the intermediate team to play in the first round.

Bowman said the Flames played a bit too conservatively in Thursday's and Friday's doubles rounds.

"I was hoping they were going to be a little more aggressive, knowing the terrain and what they had to do," he said. "They played smart golf and played safe, which was good. We shot 2s and 3s on doubles the whole round so we were really consistent. But we weren't able to connect to put a big charge to be in that top 20."

Bowman said the experience will benefit the team for the future.

"They got it in them now," he said, noting the team stopped on the trip back from Lynchburg to play an extra round. "They'll be mentally ready and that much more intentional in practices to make it back there next year. They'll be out playing and prepping. They're fully invested in it."

In the Intermediate Division tournament, the Flames finished 13th out of 19 teams with a total of 27-over 573. Texas State, seeking the automatic team bid to next year's nationals, loaded up its B team and won with a 49-under 561, including Sunday's bonus round.

"The ‘wow' factor got to them a little bit," Bowman said. "They showed some good signs for the future and found some things they need to work on."