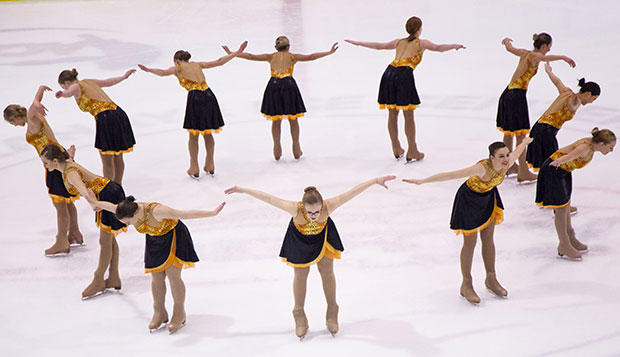 PraiseFest on Ice had its sixth annual showing, Saturday night at the LaHaye Ice Center, with a combined performance from Liberty University's figure skating and synchronized skating teams and members of the Lynchburg community.

"The highlight of the performance for me was being able to highlight so many talented skaters in various ways, in their singing as well as their skating ability," said Tatiana Payne, who serves as head coach for both teams. "Having community skaters involved was great, and they seemed to enjoy the atmosphere."

The theme of this year's program was "Hearts Aflame."

"We've been working on it since the end of February, after the synchronized skating team's trip to Sectionals (in Lake Placid, N.Y.)," Payne said. "The whole team did a really great job."

The hour-and-a-half-long show, featuring predominantly Christian songs, started with the lights turned off and the windows covered at LaHaye, and only a window dressing of artificial light on the backdrop as the skaters were introduced by spotlight. It quickly shifted from darkness to light with the opening dance to "God's Not Dead" by newsboys in a skate that featured all 45 of the show's participants. That included Liberty University Radiance, the synchronized skating team that began with black covers before eventually displaying their brightly colored outfits.

"The costumes were not too elaborate," Payne said. "We try to keep the cost to a bare minimum so we can make some profit off of it for the team."
The show included solo skating routines by Liberty team members Kelsey Rieschl, Anna Johnson, and Kelly Pollock as well as Maya Carter, one of the up-and-coming figure skaters from the Lynchburg area who also skated with Johnson and Patricia Justice in a trio to the song "God Bless the Broken Road," by Selah.

Payne said she received the most positive feedback from the LU skating team's skit, in which all 25 of the skaters involved performed sign language to the song "Testify to Love" by Avalon.

"I got a few comments from parents that really enjoyed it and said it was very touching and one of the best choreographed routines in the years that Praise Fest has been performed," Payne said.

The event raised about $1,000 for Liberty University Skating program, which supplements the money raised over the winter through the Learn to Skate program.