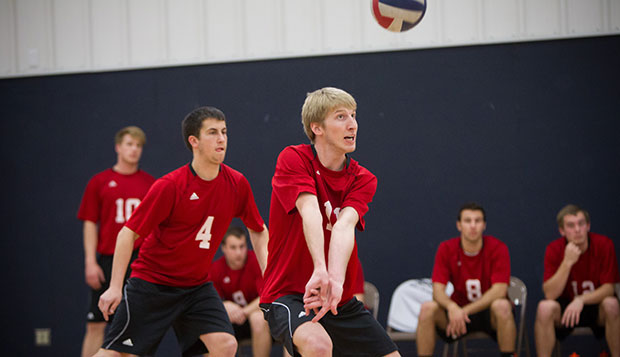 Playing in the Dallas Convention Center, as one of 360 teams competing on 52 courts, was an incredible experience for Liberty University's men's volleyball team in the National Collegiate Volleyball Federation Collegiate Club Volleyball National Championships held this past Thursday through Saturday.

Adjusting to the depth perception of playing in a larger arena wasn't too difficult, but there were other challenging factors to consider, besides the competition.

"You were surrounded by courts, 10 feet to your right and left, and hearing 30 whistles on one play from the refs made for a totally different atmosphere," Rigg said. "I bet we had to stop five plays per match with balls rolling into play."

The Flames exceeded expectations, finishing fifth out of 24 teams in the Division IAAA field after coming in with a 7-19 record that qualified them as the 20th seed.

"Our work as a whole for the three days was probably some of the best volleyball we've played all year," Rigg said.

Liberty won four of its five matches in Thursday's and Friday's pool play to advance to the Gold Bracket, or championship flight. There, the Flames lost to top-seeded eventual tournament champion Iowa State 19-25, 29-27, 15-9 in Saturday morning's first match of the single-elimination playoffs.

"We probably should have won that one," Rigg said. "In the second game, we were leading 23-21, two points from closing it out. Unfortunately, they held on and gained momentum going into the third game. They had a very good outside hitter, who was the overall MVP for Division IAAA."

"He had one very inspirational play in the Iowa State match where he jumps off the playing court and leaps over a row of chairs to save a ball and brought it back into play," Rigg said.

"The first day was very important," Rigg said. "We went 3-0 to put us on our trajectory for the Gold Bracket."

"Vanderbilt had an amazing outside hitter," Rigg said. "Probably 75 percent of every kill they got came from him. Washington State was a much smaller team, but had very good defense and passing."

After reaching the Silver Bracket in the Division IAA tournament, last year in Kansas City, Liberty did at least as well by making it to the Gold Bracket in Division IAAA in Dallas.

"Half the team was young guys who had never made it to the tournament before," Rigg said. "We were a little younger, but I think our team this year was better."

The Flames' desire is to compete in the Division IA bracket of next year's national tournament, which will be played in Reno, Nev. Divisional placement and seedings are largely determined by a team's regular season national ranking.

"On the flight home, I was able to speak with some of the freshmen and sophomores," Rigg said. "The core that is staying is really solid and they are dedicated to move up into single A next year.  Our goal for the fall is, after hosting two or three tournaments, to be nationally ranked going into January of 2014."