Flames use ride to roll over Wolfpack, face Tigers in ALC final 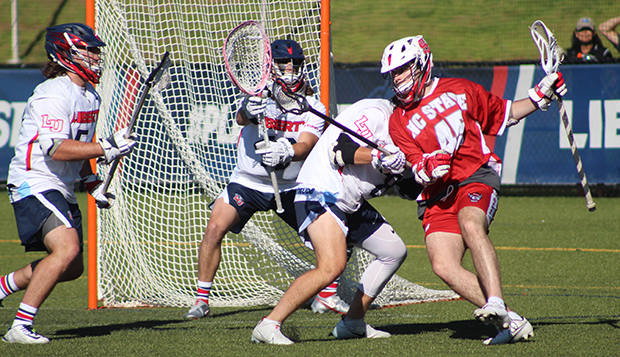 Liberty University's men's lacrosse team advanced to the inaugural Atlantic Lacrosse Conference (ALC) Championship final with Saturday's 14-8 victory over North Carolina State under spectacular conditions at the Liberty Lacrosse Fields. The host Flames (6-2) will challenge Clemson (5-3), a 19-10 winner over Virginia Tech in Saturday's first semifinal, for the ALC title on Sunday at 3 p.m

"Clemson got the best of us in the regular season and to get another chance at them on our own turf in a conference championship game, we have no excuses not to right the wrongs and try to get some retribution," Liberty Head Coach Kyle McQuillan said.

After NC State attack David Baird knotted the game at 2-2, Flames senior goalie Ryan Reynolds made a juggling save of a high shot from the top of the box, allowing Liberty to reclaim possession and the lead.

Mohs scored to put the Flames up 3-2 before Miller received a pass from Carter in the left side of the box, where he unleashed a submarine shot inside the top right corner of the cage, doubling the lead to 4-2 before the end of the first quarter.

"We just ran our offensive sets well," Carter said. "I was just a role player today. I love to see when other guys get to score. Caleb, Jackson, and Keaton, I fed all of them."

Reynolds saved 64 percent of the shots on goal he faced (14 out of 22) and the Flames' defense held the Wolfpack scoreless on five extra-man opportunities, including the three-minute penalty to start the second quarter.Wolfpack sophomore attack Kevin Ritter started the second quarter by trimming the deficit to 4-3 with a low shot from the right side of the box before Britton capitalized on a one-on-one fast break on the other end less than 15 seconds after the ensuing faceoff and senior midfielder Carter Elliott (2 goals) extended Liberty's lead to 6-3 moments later.

"With Ryan this season, we actually can to a certain degree rely on our goalie to do that every game," McQuillan said. "He plays lights out and is a huge reason for our success."

Liberty stretched its advantage to 7-3 with 3:37 remaining in the first half when Carter received Branham's pass from behind the left side of the cage and one-timed a shot past Wolfpack goalie Seth Doyle. Ritter answered 27 seconds later with a sharp-angled shot from the right side that beat Reynolds to the upper netting. But Miller responded by receiving a pass across the top of the box and ripping a shot from the perimeter into the back of the net, boosting the edge to 8-4 with 1:33 left in the half.

The Flames started the second half on a 4-0 run, with senior attack Thomas Pinel putting away an assist from freshman middie Remy Newton at the 9:55 mark. Britton netted the next three goals in a row, the last two by finishing feeds from Branham, before Mohs answered a bounce shot finish by the Wolfpack's Matthew Berendsen by making a move behind the left side of the cage and emerging for a score that pushed Liberty's lead to 13-5.

"That was by far our best quarter on both sides of the ball," McQuillan said. "After that third quarter, we sent the message that this was our game and we weren't going to be giving it back to NC State."

After allowing the Wolfpack to net the first three goals of the fourth quarter, cutting the gap to 13-8, Elliott capped the scoring with 1:54 remaining in regulation by darting out of the right corner and finishing past Wolfpack freshman replacement goalie Ridge Massarelli.

"Carter (Elliott is) just so fast," Carter said. "He came down with the last goal to set us apart and that shifted the momentum."

Junior faceoff specialist Cole Jankowsky won 13 out of 22 attempts to put the Flames on offense the majority of the time as they held a significant advantage in time of possession.

The Tigers dealt Liberty its only regular-season conference defeat at a neutral site, April 17 in Spartanburg, S.C., where the Flames' 10-man ride wasn't effective at all, according the McQuillan. He says that will be a key to turning the tables on the Tigers in Sunday's final.

"The thing that really gave us opportunity after opportunity and was the foundation of controlling (Saturday's) game was our ride," McQuillan said. "It's a big part of who we are and a big strength of ours. We can't rely on it solely because Clemson's got some athletes that are going to do well against it, but if we can create some turnovers and an extra opportunity or two in the game, we've got to take advantage."

"We have really good athletes, so if we just stay true to ourselves and play as a team, we'll be successful," Carter added. "If we run our offensive sets well and are successful on our rides and clears, we should be able to match up with them."

He said capturing the ALC Tournament title would give the Flames a boost of confidence heading into the May 12-14 MCLA Invitational in Round Rock, Texas, where they will face perennial national power BYU in the first round.

"Honestly, this ALC Conference Championship means a lot more to us, winning the first one," Carter said. "We never got an SELC Championship, so to take home our first conference championship would be awesome." 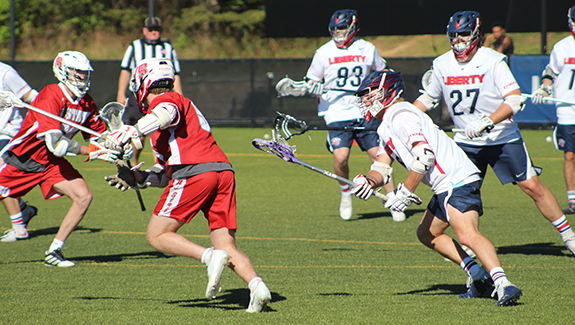