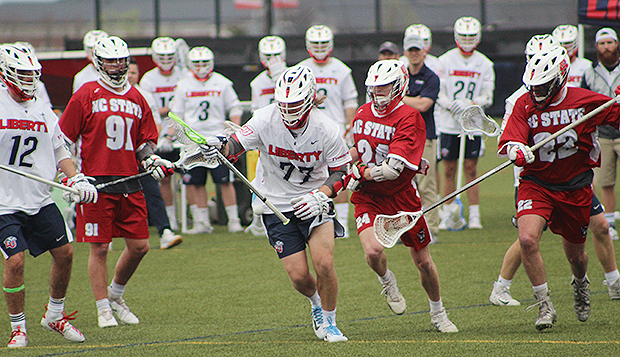 Finding out on Wednesday that it is officially in the field for the May 12-14 MCLA Invitational in Round Rock, Texas, has given Liberty University's men's lacrosse team extra incentive going into this weekend's inaugural Atlantic Lacrosse Conference (ALC) Championships at the Liberty Lacrosse Fields.

"Hosting the event, we continue to be reminded that we are fortunate to be in a position to have a conference tournament and we're anticipating it being a great event," Flames Head Coach Kyle McQuillan said. "None of these opponents are new to us, but we definitely anticipate a different level and version of these teams with a conference championship on the line."

Both of Saturday's semifinals — between Clemson and Virginia Tech at 1 p.m. and Liberty and North Carolina State at 4 p.m. — and Sunday's 3 p.m. championship game will be broadcast live by the Liberty Flames Sports Network (LFSN) and streamed on ESPN+. McQuillan said that network connection provides a platform to showcase Liberty and the tournament — the only MCLA conference championship event to be played this spring — for lacrosse fans across the country.

"NC State is a game that we feel pretty good about as we have had success against them in the past," McQuillan said, referring to the Flames' 19-9 home triumph on March 27. "But NC State took down Virginia Tech early in the year, which was not expected by many teams in the ALC. We're going to have our hands full and take one game at a time and hope to be in that position to play (for the title) on Sunday."

Liberty sustained its only ALC loss April 17 at Clemson, which lost at Virginia Tech last Friday before the Flames ended the regular season the same way they started it, by defeating the Hokies on Saturday.

The Flames (5-2) were selected as one of four MCLA Division I teams from East of the Mississippi River to compete against four MCLA Division I teams from states out West. They will be the third-seeded East squad and face Brigham Young University, the No. 2 seed from the West, on Wednesday, May 12, at 2 p.m. Other games will pit Georgia Tech (5-0), the No. 1 team from the East, against Utah Valley (4-4), the No. 4 team from the West; No. 2 East seed Clemson (3-3) against No. 3 West seed Concordia-Irvine (5-4); and No. 4 East seed Louisiana State University (4-3) and No. 1 West seed Chapman (5-0).

McQuillan, one of more than 15 coaches to serve on the MCLA Invitational selection committee, said the pool of teams to choose from was narrowed to around 30 that were not only cleared by their respective schools to compete this spring, but also to travel after COVID-related restrictions were lifted.

"After last year, when, like everybody else, we were not able to have an end-of-the-year event, we didn't want to be faced with that again," he said. "At the end of the day, it is still collegiate lacrosse and they are going to be able to crown a champion and we're looking forward to it."

He said an emphasis of the tournament selection was setting first-round showdowns that were not possible during the regular season.

"The matchups in the first round are fantastic," McQuillan said "We could face Georgia Tech in the semifinals, which is a team we would love to play again, and Chapman could play Concordia, another California team, so there could be some crossover. But the focus for us was making sure those first-round games were unique and exciting."

He noted that none of the eligible MCLA Division II teams made the eight-team field, but that they have opted to schedule their own informal tournament next weekend.

Though no official MCLA Tournament Championship will be crowned in Texas, McQuillan believes more than bragging rights are at stake.

"Whoever wins it I think should be given that title, as MCLA Invitational champion," he said, noting that this weekend's tournament at Liberty will celebrate an inaugural ALC Championship winner.

No fans or extraneous team personnel will be allowed at the national tournament venue, but all of the games will be streamed live on a pay-per-view MCLA Watch Party.

Complete schedule information is available on the MCLA website.