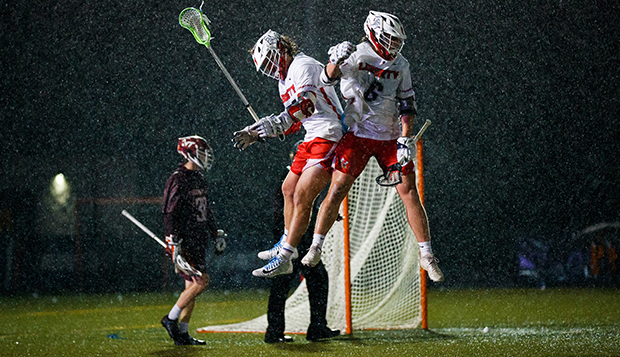 In a soggy, back-and-forth battle between Atlantic Lacrosse Conference rivals, Liberty University's men's lacrosse team held Virginia Tech to one goal in the second half of an 11-8 regular-season-ending triumph, Saturday night at the Liberty Lacrosse Fields.

"It was a huge team win, honestly, just top to bottom," said senior goalie Ryan Reynolds, who made a season-high 18 saves. "Coming back from a loss last week (at Clemson), we couldn't have performed better. In the second half, that was probably the best we've ever seen (the 10-man ride) work. It was a full team effort. We were just riding tough, being aggressive on the ball and getting it back whenever they had it, just really fighting for it."

"For Caleb, that was definitely his biggest game of the season so far," Liberty Head Coach Kyle McQuillan said. "It's great to have consistency, but there's something special about some of the best players are the ones that show up in the big games and the big moments and we hope to have him continue to do that moving forward."On Senior Night, senior attackmen Caleb Britton netted four goals and Jackson Miller added two goals and three assists to spark the Flames.

Sophomore midfielder Remy Newton tied the game at 2-2 before freshman middie Keaton Mohs (2G, 2A) eventually gave the Flames a 4-3 lead off an assist from junior middie Thomas Pinel. Liberty padded it to 5-3 with 40.5 seconds left when Britton finished a feed from Miller in the left crease.

"I saw a guy run over toward the crease and I just dropped as fast as I could because he didn't have it fully in his stick, got my body down and made the save," Reynolds said.With the Hokies on a man advantage for the final 30 seconds of the quarter, Reynolds made a fantastic save of a point-blank shot in front, preserving the 5-3 advantage.

Liberty started the second-quarter scoring after senior middie Carter Elliott picked up a ground ball near the top of the box and Miller set up a goal that extended the lead to 6-3 at the 13:35 mark.

Hokies middie Alex Williamson capitalized on a fast-break feed from attack Will Giannelli just over a minute later, before Giannelli added another score off an assist from defender Ethan Robertson, trimming the deficit to at the 5:18 mark.Reynolds made another clutch save with the Hokies on a man advantage and Miller assisted Britton on the other end to stretch Liberty's lead to 7-3 and prompt Virginia Tech to call timeout at the 9:33 mark.

Virginia Tech remained on attack even a man down and made it a one-goal game when Gianelli netted a low sharp-angled shot from the right side with 4:44 to go. Less than a minute later, Miller put the Flames back up by two, 8-6, with an unassisted score.

But the Hokies made it a one-goal game again just under a minute before halftime and knotted the game at 8-8 just over two minutes into the second half on a shot by attack Hunter Capestany.

"That second quarter, we really struggled with possession," McQuillan said. "It felt like the entire game against Clemson, when we couldn't win a faceoff and couldn't slow down their offense. We gave Virginia Tech a chance to get back in it, but in the second half, we threw a lot of different things at them, changing personnel, and doing some things to shift the momentum. We are at the point in the season where we're pulling out all of the stops."

Mohs netted a wraparound shot after coming from out behind the right post to put the Flames back on top, 9-8, with 8:17 to go in the third quarter.

Britton completed his hat trick off an assist from Mohs with 13:23 remaining in regulation, padding the Flames' lead to 10-8, before sneaking his fourth goal past VT goalie Hunter LeClair unassisted with 5:24 to go with a shot into the top right corner of the cage, providing the final three-goal separation.

"I love playing them," Reynolds added. "They're always a fun game. They're nice and vocal on the sideline. It's a great rivalry.""The guys rode really hard, took their time in our offensive possessions, and had some great defensive stands followed by Ryan Reynolds having another phenomenal night in the cage," McQuillan said. "He's been the heart and soul of that defense, if not the entire team, and to be able to see him go out tonight and play such a pivotal role tonight against our biggest conference rival was awesome."

The win over Virginia Tech sets the seedings for next weekend's inaugural ALC Tournament at the Liberty Lacrosse Fields, with the Flames seeded second and facing third-seeded North Carolina State in one of two semifinal contests on Saturday afternoon. The Hokies will get a rematch with the top-seeded Tigers in the other, with the two winners advancing to Sunday's 3 p.m. championship game.

"It will be nice to be playing before a home crowd with three great teams on hand," McQuillan said. "There is a lot of parity coming into the conference tournament so anything can happen. We are proud of the fact our conference will have a tournament and crown a conference champ. We want to finish this season with some hardware, and the ALC championship is a chance at that."

"We're feeling really confident going into the tournament," Reynolds added, noting that he believes the Flames' names will be called Wednesday when a selection committee decides which eight teams will make the field for the May 10-12 MCLA Invitational in Round Rock, Texas. "With it being an invitational, there are a lot of ifs, but we have a lot of faith that we're going to be in Texas come May." 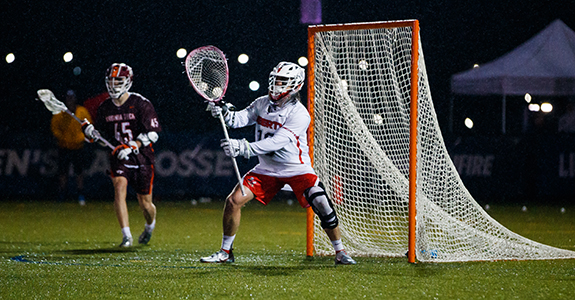