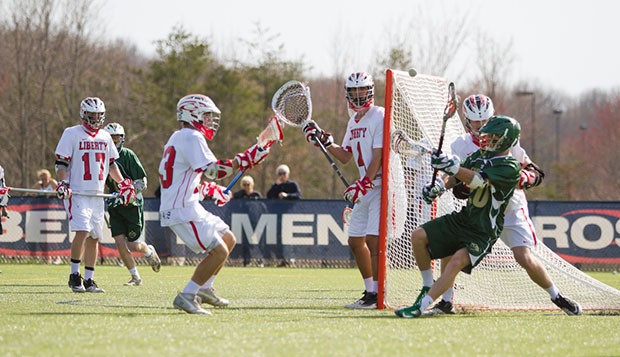 Liberty goalie Ethan Kamholtz receives support around the cage in Sunday's 25-1 victory over UNC Charlotte. His bid for his first shutout of the season ended a minute into the second half.

Freshmen have played major roles for Liberty University's men's lacrosse team this spring in its rise to prominence in the Men's Collegiate Lacrosse Association, where it has ascended to the No. 5 ranking in the nation, and the North West region of the Southeast Lacrosse Conference.

"It's been really cool as freshmen to be able to contribute to the team this much," said Miller, who scored four goals and distributed four assists to complement Mrakovich's three goals and seven ground ball pickups.  "I think we're both pretty good. We have some good chemistry with the rest of the offense."

Fianko, meanwhile, won 23 of 27 faceoffs and picked up 20 gound balls to spark the attack.

"We knew we were the better team out there today, so it was just a matter of executing on offense," Miller said. "We played pretty solid defense and we controlled the ball. Charles, our faceoff man, definitely dominated in that aspect of the game."

Miller, who now has 52 goals and 30 assists on the season, was as excited about setting up his teammates for scores as he was about putting the ball in the net himself.

"Today, I was trying to help out some of the guys that don't get in as much, get them some goals and some playing time," he said. "I fed one to Asa Keimig, who's a senior and he's worked really hard his whole career, so it was really awesome that he got a goal. That was pretty special."

Junior attack Kurt Tobias led all scorers with six goals and added six ground-ball pickups and sophomore attack Chris Armstrong contributed three goals and three assists to carry the offense, which featured 13 players with at least one goal or one assist.

Sophomore goalie Ethan Kamholtz nearly posted his first shutout, with the Flames leading 15-0 at the half before UNC Charlotte ended the scoring drought less than a minute into the second half.

"Today's game was great," Liberty head coach Kyle McQuillan said. "The guys were able to come out and have fun. It was a nice day. We were able to get everybody in and get some guys on the score sheet that aren't always there, which was fun."

McQuillan said the victory clinched the Flames (12-1, 3-0) a spot in the SELC tournament in Atlanta before they host defending champion Elon (9-1, 3-0) in the regular-season finale Friday night to determine the top seed.

"Games like this kind of build our case for us moving into Division I," McQuillan said. "We kind of needed a boost after Friday's (13-10 loss at Division I Richmond). Getting out and playing lacrosse and reminding ourselves we're a really good team was important."

Next Friday's game has the potential for much greater reward in preparation for a first-ever trip to the MCLA national tournament in Greenville, S.C.

"They're 9-1 and their one loss was to Sam Houston, a Division II team (ranked No. 10 in the MCLA poll)," McQuillan said. "Elon's the defending champions and we have to respect that. The SELC Championship goes through them. Last year, we played them twice and they beat us both times by one goal. They were the team that ended our season. So these guys have a lot to repay."