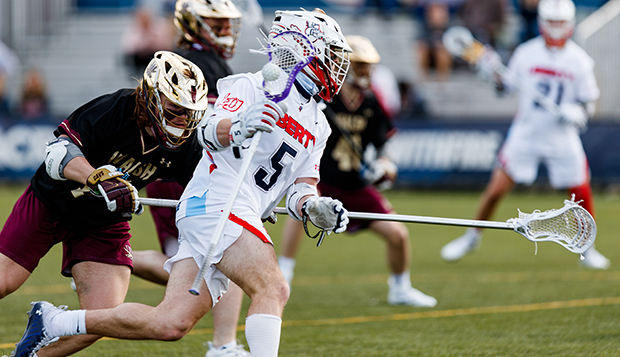 While most Club Sports programs are winding down seasons shortened by COVID-19 restrictions, Liberty University's men's lacrosse team's schedule is just starting to heat up, culminating with Saturday night's regular-season-ending showdown against Virginia Tech, set for 8 p.m. at the Liberty Lacrosse Fields.

"The next couple weeks are pretty pivotal for our season," Flames Head Coach Kyle McQuillan said. "We are looking forward to Senior Night (Saturday) and then playing in and hosting the inaugural ALC (Atlantic Lacrosse Conference) Championship Tournament next weekend."

Seedings have yet to be finalized for that inaugural four-team tournament featuring the Flames and Hokies as well as Clemson and North Carolina State, but semifinal games are set for next Saturday at 1 and 4 p.m. at the Liberty Lacrosse Fields, followed by next Sunday's 3 p.m. championship final.

Before then, an MCLA selection committee will determine on Wednesday the eight Division I and II programs that qualify for the May 12-14 MCLA Invitational in Round Rock, Texas — out of the 24 (17 DI and 7 DII) teams that are playing full seasons this spring and have been cleared and certified by their schools' administrations to travel.

"A lot of teams competing right now haven't been certified by their universities to travel," McQuillan said, noting that includes 2019 MCLA DI national champion South Carolina. "The good news is a lot of the top programs have been playing this year, and if we have an opportunity to go, there will be great competition."

Round Rock is also the designated site for the 2022 MCLA National Championships, which will feature 16 DI and 16 DII teams.

Though the ALC is the only MCLA conference to hold a championship tournament this season, it will not provide an autobid to the Invitational in Texas.

"We will be playing our inaugural tournament solely for bragging rights," McQuillan said, noting that the selections will be made two weeks prior to the MCLA tournament in order to give teams enough time to arrange their travel itineraries.

Virginia Tech, which opened its season with 17-13 and 16-13 losses to Liberty and NC State, respectively, in March, is coming off 25-6 and 17-14 victories over ALC member Tennessee and Minnesota in April.

The Hokies will host Clemson, which is 3-0 against ALC opponents this season, tonight in Blacksburg, Va., before traveling to Lynchburg on Saturday night. The Tigers' only losses have come against SELC powers Georgia Tech and South Carolina.

"Clemson is in the driver's seat and if they win tonight, they will be the ALC regular-season champions," McQuillan said. "For right now, our only focus is on Virginia Tech, and then winning a conference tournament. That's something we know we're in control of, and we have a great opportunity to be the first ALC Champion. We will let the games play themselves out, and see where we land (in the MCLA Invitational field)."

McQuillan expects a much stiffer test from the Hokies at home this weekend than the Flames got in Blacksburg.

"Absolutely, we knew that when we played them early on in the season this was definitely going to be a very different team from the team we played early on," he said. "They have had a lot of time to get games under their belt and have had great success. It being our Senior Night, they would like nothing more than to spoil that."

Liberty will honor its seniors from not only this season, but last spring's team who are back in town. The Flames didn't have a chance to give them a proper sendoff after last season was cut short by COVID-19.