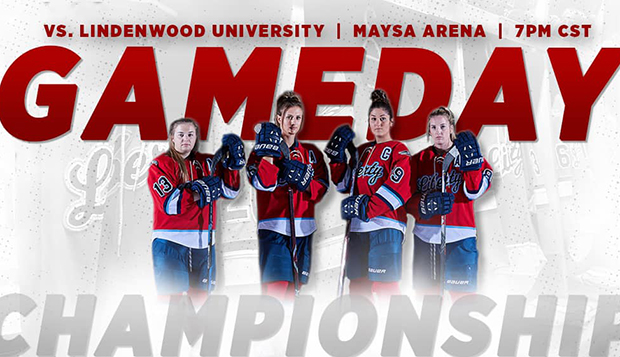 While Liberty University's ACHA Division I women's hockey team will contend for its third consecutive national title tonight at 8 p.m. EST in Minot, N.D., the Flames' DI and DII men's hockey teams are making their first appearances in the ACHA's version of the "Frozen Four" since 2008 and 2017, respectively tonight in St. Louis and Bismarck, N.D., respectively.

For the second time in the tournament, the top-ranked Lady Flames will take on Lindenwood (Mo.) University at Maysa Arena, where they shut the Lady Lions out in Thursday's opener, 4-0. Starting with the 8 p.m. EST puck drop, Liberty will seek to match Lindenwood's ACHA DI women's records for most titles in a row (three, set from 2008-10) and the most overall (four). The Lady Lions are the only ACHA team to beat Liberty over the past two seasons (three times) as the Lady Flames (18-1, 14-1 ACHA) have posted a 48-3-1 record in that time and an astonishing 115-7-4 mark since 2017-18, when they captured their second crown in Head Coach Chris Lowes' first season at the helm.

Liberty's DI men (12-4, 10-3 ACHA), ranked and seeded fourth in its 16-team tournament, routed 13th-seeded host Maryville University on Friday, 9-0, before overwhelming No. 5 Ohio, 10-2, in Sunday's second round to advance to its first national semifinals since its second season playing at that level in 2008. The Flames lost to Illinois that year after eliminating Penn State for the second year in a row. (The Nittany Lions, who now compete at the NCAA DI level, had advanced to 10 straight ACHA DI national championship games from 1997-2006.)

Tonight at 8 p.m. EST at the Maryville University Hockey Center, just outside of St. Louis in Chesterfield, Mo., Liberty will challenge sixth-seeded, defending national champion Minot State, which upset third-seeded Lindenwood, 2-1, on Sunday. It will be the first time the teams have met since 2016, when Liberty was swept by the then-No. 1-ranked Beavers, 5-3, after opening a 3-0 lead in the opener, and 5-4 in overtime in the regular-season-ending series finale at the LaHaye Ice Center. Minot holds a 7-2 lead on the Flames all-time, with the two teams defending their home ice by sweeping two-game series in 2015.

"We just have to keep focusing on our game and executing it," Handy said. "We are excited for the opportunity."

The winner will face the winner between No. 1-ranked Adrian College, which blew out No. 8 Iowa State on Sunday, 10-2, and No. 7 Indiana Tech, which upset No. 2 Robert Morris (Ill.). The Flames swept the top-ranked Bulldogs last Feb. 21-22 at the LIC and moved up to No. 2 in the national rankings before the ACHA DI tournament was canceled by COVID-19. This season, Adrian swept Liberty in its ACHA DI opening series, Nov. 12-13 in Michigan.

Liberty's fourth-seeded DII men, meanwhile, will be playing top-seeded University of Mary for the fifth time this season, but first on the Marauders' home ice at the Starion Sports Complex, starting at 7 p.m. EST. The Flames tied Mary in their season-opener on Oct. 22 at the LaHaye Ice Center and again on March 5 at Lindenwood. The Flames lost back-to-back games to the Marauders on Oct. 23-24.