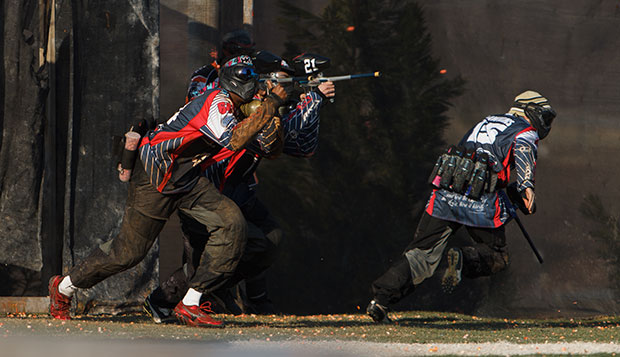 Competing in SEC Class A Event No. 2, the Flames played on the same course layout and used the same match format as what they will experience at nationals, with teams trying to score as many points as they can in two 10-minute halves.

"It was the primary format, what we usually play, the top format of the paintball scene," Liberty head coach Todd Hoglund said, noting it's the version used when the Flames finished in the top four at nationals the past two years.

Fans can watch live webcasts of the April 19-21 nationals, when Liberty will seek to challenge for its first title.

After beating Tennessee 6-3 in Saturday's first match in Georgia, the Flames lost to Kennesaw in overtime, 5-4.

"It was back and forth," Hoglund said. "It was a battle. It came down to an overtime point, on a controversial play."

The Flames then defeated the Volunteers a second time, 5-3, before falling again against KSU, 8-2.

Liberty had swept Tennessee and split two matches with Kennesaw, with three of the four skirmishes decided by just one point, when it hosted SEC Class A Event No. 1 on Nov. 4.

"We finish the regular season in second place of the Southeast Conference," Hoglund said.

The team was a combination of its Red and Blue squads.

"We blended some of the lines," Hoglund said, noting some subbed in as reinforcements after teammates were eliminated. "When you get eliminated, you're out, and every time you hang your opponent's flag, the clock stops and you have two minutes to get people back out on the field to start again," until the 10-minute half has expired.

He said that two-minute transition time between live firing can be just as hectic.

"You use that time to get paint and air, wipe the tips off (the rifles), get a sip of water and get your game plan, to figure out what you're going to do differently," Hogland said. "It's coaching on the fly."

He was pleased with the way the Flames were able to adapt to what their opponents were firing at them.
"We played well," Hoglund said. "We were able to change our game plan based on what we were seeing, which is what we tried to learn from our last event."

He said Liberty's biggest standout was Jeremy Miller, the newcomer from Massachusetts who also played well in last Saturday's MSCC Class AA Event No. 4 hosted by the Flames.

"He played very well, dominating our snakeside, which are low-to-the-ground bunkers," Hoglund said, noting most fields have snakeside and Dorito-shaped bunker formations. "Nate Hawkins was playing our Dorito side pretty consistently and Aaron Thompson (Liberty's team captain), had solid play and stepped it up in times of need. We're seeing some guys step up and take that leadership role and guys playing up to their ability, or above it."

The Flames' players and coaches remained vocal throughout the matches, both on the field and outside the netting from the sidelines.

"Our communication was really good," Hoglund said. "They listened to all of the coaching and adjusted mid-game."

On Sunday, he plans to change the setup at Liberty's Paintball Complex to match the layout for nationals in time for practices this week.

"We're going to work on some individual gun skills so the guys are able to win their gun fights better," Hoglund said. "And we're going to try to improve our endurance, for when guys are running back-to-back-to-back points. After they score a point, they're exhausted from having played, and we have to tell them, ‘OK, get back on the field and do it over again.'"