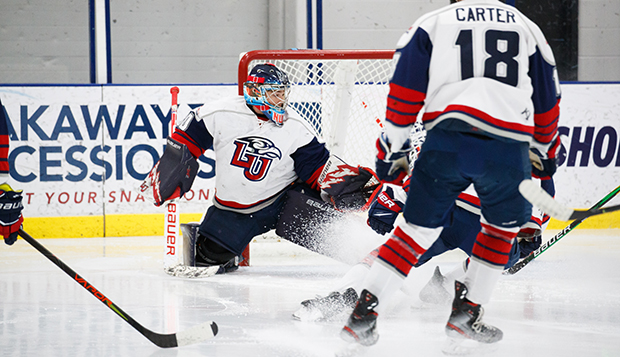 "You definitely can't give enough credit to our goaltender," Flames Head Coach Ben Hughes said. "Dakota played fantastic and our defense did a great job of finding sticks and clearing the rebounds out."

It was the fifth meeting between the two Southeast Region powers, Liberty (11-7-3) and FGCU (10-6), with both teams sweeping series this semester in Fort Myers, Fla. The Flames outshot the Eagles, 35-31, but didn't always seem to have the edge.

"They have a great team and a lot of that game they dominated," Hughes said. "We came out on the winning end, but there were times in the game when they had a lot of control and had us on our heels. They move the puck so well, skate well, and they have really smart players. But if you want to be a champion, you've got to beat a champion."

A split second after FGCU killed a five-on-three power play, senior defenseman Aaron Partridge launched a shot from near the blue line that deflected off an Eagles player into the upper netting for a 1-0 Liberty lead with 15:02 left in the second period.

Ten seconds into their next power-play opportunity, the Flames capitalized to double their lead to 2-0 when senior forward Michael Niederer sent a pass to sophomore forward Luke McFarlane in the left circle where he ripped a shortside shot through a screen set by junior forward Justin Barstead inside the left post at the 13:08 mark.

Less than two minutes into the third period, the Eagles trimmed the deficit to 2-1 when Corey Richardson cleaned up a puck left on the doorstep after a shot from the point from fellow defenseman Philip Lasker.

But Liberty added an insurance goal with 11:13 remaining in regulation when freshman forward Trevor Granzow, who had a hat trick in Friday's 8-5 win over Aurora, tipped in junior defenseman Maxx Mitchell's shot from the point for a 3-1 advantage.

FGCU pulled its goalie, Ryan Nussbaum, in the closing minutes and junior forward Timothy Doe put the pool-clinching victory on ice with an empty-netter on a shot from the red line with 1:18 to go.

"You definitely need a lot of momentum, but even more so, you just need a group of guys that are willing to be unselfish and sacrifice for each other," Hughes said. "We have tons of leadership on our team, but most times they would wait until we had to to do something. Today, we had to and they did it."

With a day off on Sunday, members of the four teams advancing to Monday's Final Four will participate in a community service outreach at the University of Mary Fieldhouse, packing lunches for kids that are less fortunate and don't usually have food over the weekend.

The Flames, who were seeded No. 1 in their four-team Pool D, will face the University of Mary, which advanced out Pool A with a 3-0 record, in Monday's second semifinal at 7 p.m. EST with the winner advancing to Tuesday's 7 p.m. national championship game. Liberty tied Mary, the top-ranked team in the nation, in its season-opening game on Oct. 22 at the LaHaye Ice Center and again on March 5 at Lindenwood. The Flames lost back-to-back games to the Marauders on Oct. 23-24.