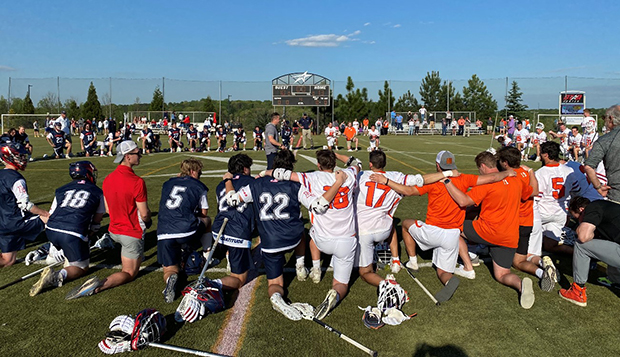 "The entire game, we were playing a lot of defense," Flames Head Coach Kyle McQuillan said. "They were definitely winning the possession game early and often. We won one faceoff in the first half and seven for the game, while we lost 19. You might be able to beat a decent team when for every one possession you get they're getting two or three. But you can't beat teams like Clemson doing that because they're going to take advantage of it."

Liberty (4-2) was held to two goals in the first quarter and three in the first half, when it trailed 5-3 at the break.

"Our offense took way too long to get rolling," McQuillan said. "They had some off firepower, and a number of attackmen that came ready to play, and they hit some pretty great shots. They scored first and got the lead and never gave it back."

"Both goalies played lights out and Ryan in our cage was a huge reason we were competitive that whole game," he said. "He was being peppered and made some saves he had no business making that kept us in the contest."

Due to COVID-19 concerns, this was the Tigers' first and only home game on the season, and it was played in Spartanburg, S.C., more than an hour's drive from Clemson. The Tigers, who were coming off a 14-8 loss to SELC power South Carolina, improved to 4-1 while Liberty slipped to 4-2.

"Give Clemson a lot of credit," McQuillan said. "They played really well, probably the best Clemson team we've played. Clemson has always been a formidable foe, but for them to come away with a victory in our first ALC faceoff was significant. They have persevered through a lot of situations because of COVID, like having to practice off campus, and they have found a way to push through."

The last time Liberty played Clemson was March 7, 2020, when the Flames defeated the Tigers, 14-8, at the Liberty Lacrosse Fields to improve to 6-0 on the season. Few knew at that time, however, that that would be their season finale, as the rest of the year was cut short by the pandemic.

This year, McQuillan is hopeful that Liberty will have an opportunity to meet Clemson again when the Flames host the inaugural ALC Championships, April 30-May 2, as the only MCLA conference tournament that is on the schedule.

Before that, Liberty will entertain Virginia Tech in another key ALC matchup next Saturday at 8 p.m., in the regular-season finale at the Liberty Lacrosse Fields. The Flames won the ALC season-opening showdown with the Hokies, 17-13, March 6 in Blacksburg, Va.