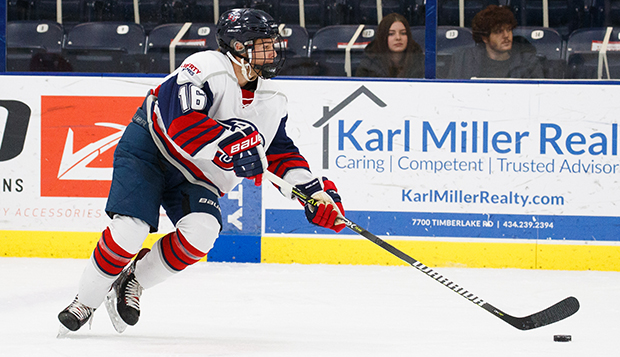 Flames senior defenseman Aaron Partridge skates the puck up ice in a game at the LaHaye Ice Center this season.

The Flames (10-7-3) turned the tables on No. 13 ranked Aurora, which had dealt them a 4-0 setback in the second round of pool play in the 2018 National Championships in Columbus, Ohio, in Head Coach Ben Hughes' first season at the helm.

Senior forward and ACHA DI First Team selection Blake Flanders started the scoring just 46 seconds after the opening faceoff with an unassisted, sharp-angled, top-shelf wrist shot from the left circle. Exactly 6:00 later, freshman forward Roman Lamoureux doubled Liberty's lead by intercepting a pass in the offensive zone and skating across the high slot before pivoting and sniping a shot from the top of the right circle past Spartans goalie Michael Buczkowski inside the left post.

Senior forward Jerrell Campbell chased down a puck in the left corner and skated behind the cage before sending a beautiful feed to Jeremy Barstead for an easy finish in front, extending the edge to 3-0 at the 12:34 mark before freshman forward Trevor Granzow netted the first of his three goals on the night for the Flames. He slammed the putback of senior forward Michael Niederer's shot inside the right post from deep in the right circle for a commanding 4-0 advantage with 3:41 to go in the first.

"Trevor's just gotten better as the tournament's gone on, and tonight he came on really well," Hughes said.

Aurora got one goal back by period's end before Granzow notched his second goal with Liberty on the power play, on a quick putback in the slot off shots by Niederer and sophomore forward Luke McFarlane with 10:28 left in the second period.

Then, at the 7:56 mark, Flames junior defenseman J.D. George came out from behind the cage to swipe the puck away from Spartans forward Rex Staudacher near the left post before sending a cross-crease pass to Campbell for a backhanded putaway out in front, stretching the lead to 6-1.

Aurora scored again before Granzow completed his hat trick by picking up a loose puck and skating though the slot with some phenomenal moves, deking his way around a defender into the right crease for a backhanded finish and a 7-2 advantage with 4:36 left in the second period.

The Spartans trimmed the deficit to 7-5 by netting three goals in a row before Granzow assisted George on the game's final goal with 2;30 remaining in regulation.

"I liked the offensive side of our game a lot," Hughes said. "We lost track on the defensive side of the puck a little bit and got a little bit irresponsible in our end. Everything was there today except the last 10 minutes of the game. We had a good moment of accountability after the game. I know that our guys are really resilient and know that we are going to clean our game up (on Saturday)."

Liberty, seeded first, will conclude pool play and seek to clinch a semifinal berth with a 5 p.m. EST showdown with Florida Gulf Coast University, also 2-0 so far in pool play.

"Florida is playing their best right now, too, so it'll be a challenging game," Hughes said.

The Flames swept the Eagles in their first series of the semester in Fort Meyers, Fla., before being swept in last month's rematch, also at FGCU.

"They are one of the most prestigious teams in DII, but if we want to be a national contender, we have to get through them, and I wouldn't want it any other way," Hughes said.