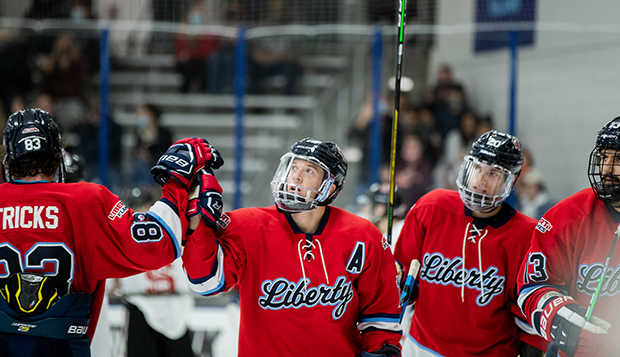 Liberty University's fourth-seeded Division I men's hockey team arrived in St. Louis with spirits high and plenty of incentive to put No. 13 Maryville University away early in Friday's ACHA DI National Championships opener. They accomplished that goal with authority, advancing to the second round with a 9-0 triumph on the Saints' home ice at the Maryville University Hockey Center.

The Flames (12-4, 10-3 ACHA) smoldered in the first period, generating some high-quality scoring chances, before catching fire in the second and third stanzas, netting five and four goals, respectively.

"We started a little slow and the first period we went back and forth, but that was kind of expected as we had a bit of nerves and our guys were just trying to get their feet under them," Liberty Head Coach Kirk Handy said. "We just got the guys in the locker room for that first intermission and tried to simplify what they were doing a little bit, and they came out in the second and third period and really played well."

In the second period alone, Liberty held a commanding 26-2 shot advantage and won 16 of 17 faceoffs from the Saints (10-7), who were making their national championships debut. For the game, the Flames outshot Maryville 55-20 and junior goalie Hunter Virostek (6-2) posted his second shutout of the season.

Liberty racked up four goals in a span of 4:24 of the second, starting at the 11:57 mark when senior defenseman Vitaliy Novytskyy won a puck near the red line and sent a pass off the right boards to senior forward Quinn Ryan, who was coming off the bench. Ryan used his speed to beat a Maryville defender to the puck before skating it wide of the cage and setting up Schwenke with a short pass back into the right crease for a top-shelf finish past Coffey, on the Flames' 20th shot of the contest.

Less than three minutes later, senior defenseman Dmytro Kobylyanskyi skated the puck out of his own zone up the center of the ice before launching a shot from the top of the right circle through a screen set by sophomore forward Devin Melice — past Coffey's glove and inside the right post for a 2-0 advantage. One minute after that, Cox chased down a long outlet pass from Fricks, who lifted the puck into the air up the right wing, and skated across the crease in front of Coffey before making a spectacular diving backhanded finish for a 3-0 Liberty lead.

"We started to find our game, started to get some pressure on them, and to establish the type of game we wanted to play," Handy said. "We had contributions from all four lines today and that's a big thing."

Schwenke fired a shot off the crossbar seconds after the ensuing faceoff before Ryan won a faceoff in the Saints' left circle back to sophomore defenseman Colin Baird. Ryan then drifted into the left crease and redirected Baird's shot from the point past Coffey glove-side for a commanding 4-0 edge at the 7:33 mark.

Finally, just 22 seconds before the second intermission, Cox sent an entry pass to senior forward Cole Gammer near the left post where he tapped a cross-crease assist to Thompson for a point-blank finish under a sprawling Coffey as the Flames padded their lead to 5-0.

The Flames added more fuel to the fire in the third when Gammer assisted Ryan on a three-on-one fast break, with Ryan deking the puck to the left of Coffey before putting it away into the open right side of the net for a 6-0 advantage at the 14:25 mark, prompting Maryville to change goalies.

With the teams skating four-on-four, and Thompson generating scoring chances left and right, he finally finished assists from Kobylyanskyii and Cox in the left crease, beating fellow sophomore goalie Johny Massara with his shot.

Flames freshman forward Kris Bladen punched in the putback of a shot by Baird with 6:02 to go before Melice deflected freshman defenseman Tom Nagle's shot from the high slot to sophomore forward Brett Gammer on the left doorstep, where he capped the scoring with a second effort at the 3:06 mark.

"All four lines contributed, and all three defensive pairs were solid for us," Handy said. "When we were finding our feet in the first period, our defense and goaltending helped to steady the ship."

Virostek is the probable starter for Sunday's second game, another 11:15 a.m. EST matchup against No. 5 Ohio University, a 5-4 first-round winner over No. 12 Missouri State on Saturday morning.

Liberty won seven of eight meetings with the Bobcats this season but had its series against the Bears, scheduled for Feb. 13-14 at the LaHaye Ice Center, canceled by an ice storm.

All 15 games in the tournament, and all 54 from the simultaneous ACHA DII and DII men's and DI women's tournaments, are being webcast live by the ACHA through its Hockey TV site, which requires a subscription.

"We now move on to Game 2 and try to refocus our guys on next task at hand, to take the positives and try to find ways we can get better going into Game 2," Handy said.