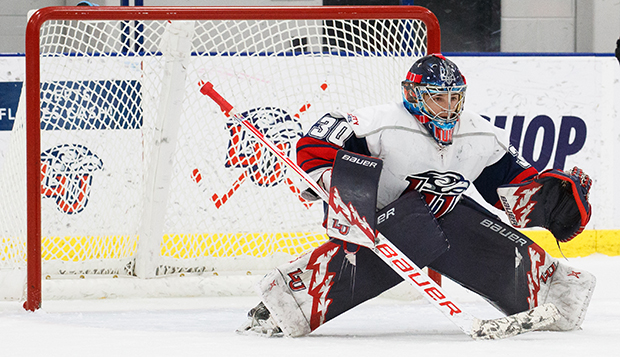 Liberty goalie Dakota Cyhaniuk was named player of the game after his third shutout of the season. (Photo by Luke Bobbey)

Happy to have sticks in hand after being forced to practice without them for the first two days in Bismarck, N.D., Liberty University's ACHA Division II men's hockey team put them to good use in Thursday night's opener of the ACHA DII National Championships.

The fourth-ranked Flames, seeded first in their four-team pool, netted two goals in the first period and junior goalie Dakota Cyhaniuk made 23 saves in a 2-0 triumph over No. 14 Concordia University Wisconsin at the Starion Sports Complex.

"For us, the big thing was getting our legs under us, and getting our sticks, which got in late (Wednesday) night," Liberty fourth-year Head Coach Ben Hughes said, noting that winning two of three games in an exhibition series against UMass on March 26-28 at the LaHaye Ice Center helped the Flames to generate some momentum going into the national tournament. "We had a great plan with our on-ice and off-ice conditioning to make sure we went into nationals on the right foot."

Liberty (9-7-3), which converted on less than 12 percent of its power-play chances in the regular season, capitalized on its second opportunity Thursday with 12:11 left in the first period when senior forward Michael Niederer skated along the left endline across the front of the cage and tucked a second-chance backhand between Concordia-Wisconsin goalie Dakota Delbridge's outstretched left skate and the right post for a 1-0 lead.

"That was a great effort on his part," Hughes said. "He wasn't even out there with his power-play line, and he went a little bit freelance with a great individual effort."

With 6:18 left in the first, Josh Wagner recovered a loose puck from fellow sophomore forward Christian Sorenson and lifted a sharp-angled wrist shot from deep in the right circle into the top left corner of the net for a 2-0 advantage.

"Dakota played great and kept us in the game, during the second period, especially, when Concordia had a lot of momentum," Hughes said. "He came up big for us when we needed. Overall, we were able to keep them to the outside, but they had a couple Grade A scoring chances. A couple hit the pipe or the post and Dakota made a few great saves."

Liberty will return to action Friday at 5 p.m. EST against Aurora, a team that shut out the Flames, 4-0, in the second round of pool play in Columbus, Ohio, in 2018, Hughes' first season at the helm.

"We're excited," Hughes said. "We haven't seen them for a few years and there are only a couple guys on the team who have played against them. We're optimistic that we can do what we do best (on Friday)."

Liberty and Concordia-Wisconsin players and coaches pray together at center ice after the game.