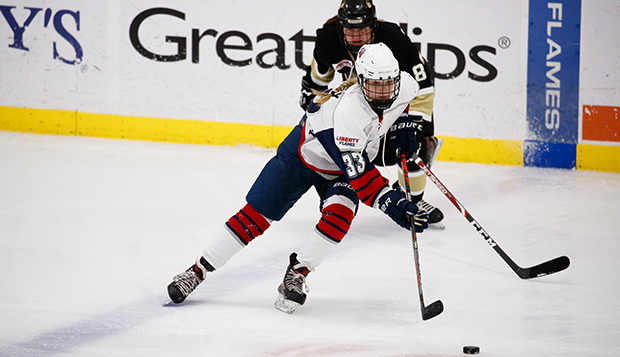 Traveling to North Dakota for this weekend's ACHA Division I women's hockey National Championships does not seem that far away, especially when more than half of the roster was born north of the Canadian border and one, graduate forward Val Manchak, hails from Ukraine.

In Thursday night's opener against Lindenwood University, the only team to beat Liberty over the past two seasons, the two-time defending national champion Lady Flames didn't show any signs of jetlag as they surged past the Lady Lions, 4-0.

"Our girls are road warriors, and they have done it over the years," Liberty fourth-year Head Coach Chris Lowes said. "We don't have any short trips and they have done a great job of handling the travel and what it does to your body and your mind and be able to stay focused. After a bit of a layoff, I was worried about rust and travel legs, but coming in a day early helped and the girls responded well."

"As we go on, we'll be tested a little further in Games 2 and 3, and hopefully, Games 4 and 5 will be the real test," he added. "Right now, our legs look good and I kind of like where we're at."

Lindenwood is the only ACHA DI women's team to win three national titles in a row, from 2008-10, and the only four-time champion and Liberty is looking to join them on that list this year.

"We're a different team and I'm proud of the work our girls have done and the team we've developed into," Lowes said. "We didn't get the full season to grow as a team, but I'm very happy with where we are at this point of the year."

Liberty ended a scoreless tie at the 10:55 mark of the first period when sophomore forward Yannick Truter picked up a loose puck near the Lady Lions' blue line and fed a short pass to Manchak. She skated into the slot and fired a shot that was blocked by goalie Emily McDonald before junior forward Alexis Lauber's putback beat her gloveside inside the right post for a 1-0 lead.

"Yannick had great energy today with a consistently strong forecheck, and her line, when she was out there with Val (Manchak, the player of the game) and Lexi (Lauber), they did good things," Lowes said.

"I was very satisfied with the start," he added. "Winning that first period was big and getting that goal by (Lauber) built some good momentum and started off the tournament right."

The Lady Flames struck again just 12 seconds into the second when McDonald was caught trying to clear the puck from behind the cage and Truter swiped it before feeding Manchak in front for an open-net finish and a 2-0 advantage.

"It was nice to get a power play goal," Lowes said. "(Truter) seems to be at the top of her game and playing with a lot of confidence now. That's exciting and makes her dangerous. The girls did everything we asked. They brought good energy, we were disciplined, with only two minor penalties, they went to work and capitalized."

Senior defenseman Sydney Pierce stretched the edge to 3-0 at the 12:54 mark of the period by launching a shot from near the blue line through traffic past McDonald.

Less than a minute into the third period, senior forward Samantha Bradford skated past a Lady Lions defenseman along the left endline and lifted a shot that glanced off the shoulder of McDonald before senior forward Danica Polson punched in the rebound to extend Liberty's lead to 4-0.

Liberty outshot the Lady Lions by a whopping 50-10 count and freshman goalie Amanda Storey made 10 saves to post her first shutout of the season.

"They had some chances and Storey made the saves she had to," Lowes said, noting that she will get the start again when Liberty return to action on Friday against McKendree, with the puck again dropping at 5 p.m. EST in Maysa Arena.

The Lady Flames shut out the sixth-seeded Bearcats, 6-0, on Feb. 20 at a Lindenwood showcase.

"For us, more than one game at a time, it's one period at a time," Lowes said. "Teams that are successful and move on just build confidence. We won all three periods today and if you're able to do that in a national tournament, you're going to be pretty successful."