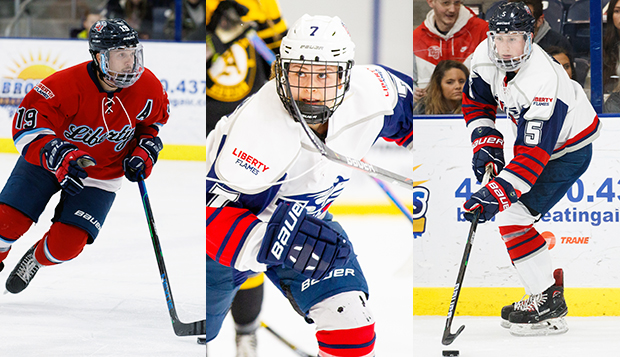 It has been one year and one month since four of Liberty University's five men's and women's hockey teams who qualified for the ACHA National Championships had their trip to Frisco, Texas, canceled by COVID-19.

This weekend, after a shortened season played mostly in the spring semester, three of those teams are renewing their national championship dreams, with the DI and DII men's squads pursuing their first titles in St. Louis, Mo,. and Bismarck, N.D., respectively, and the top-ranked DI women in Minot, N.D., in search of their third consecutive crown.

Fans can view the games on the Hockey TV website, which requires a subscription.

The Lady Flames (14-1, 10-1 ACHA) are seeking to join No. 4-seeded Lindenwood University as the second ACHA DI team to win three national championships in a row and four overall, after claiming their first in 2015. They are coming off their second straight Women's Midwest College Hockey (WMCH) Tournament title where they repeated their 2-1 finals triumph over Minot State in St. Louis.

Riding a 10-game winning streak, the Lady Flames will open play in this year's nationals on Thursday at 5 p.m. EST against the Lady Lions, the only team to beat Liberty the past two seasons, at Maysa Arena, home of No. 2-seeded Minot State.

"The only game we lost this year was (the ACHA season opener) to Lindenwood," said Liberty fourth-year Head Coach Chris Lowes, who was named the 2020-21 ACHA DI Coach of the Year for the first time. "We are still a work in progress. The national tournament is what you play for each year, and it is always our team's goal. The time has come, so we've got to make sure we dial in as a team and that the girls are in peak health and conditioning and get the rest needed to go in and perform."

The Lady Flames will face sixth-seeded McKendree University on Friday and No. 5 Adrian College on Saturday, with both games set for 5 p.m. EST. The top two teams out of Liberty's three-team pool will advance to Monday's semifinals with the championship game set for Tuesday at 8 p.m. EST.

Liberty DI men's Head Coach Kirk Handy expects the Flames to be prepared to peak at the national tournament in all facets of their games.

"We have been trying to navigate this time between our last game (the last of eight this semester against Ohio on March 20) and nationals and have worked with (Strength & Conditioning Coordinator) Chris Kerr to have our guys at the top of their game, physically, mentally, and emotionally as we go down the stretch," Handy said. "We believe in our guys and are confident that they will be ready to work together to do something really exciting (in St. Louis)."

"It will come down to us executing our game, especially on special teams," Handy said. "This time of year, your goaltending and special teams, both the power play and penalty kill, has to be great."

The Flames went 33-4 last season and were ranked a program-best No. 2 before the national championships were canceled.

Liberty's DII team, seeded No. 1 in its pool, will play Concordia University-Wisconsin on Thursday, Aurora (Ill.) University on Friday, and Florida Gulf Coast University, on Saturday, with all three games starting at 5 p.m. EST. Only the top team in each four-team pool advances to Sunday's semifinals.

The Flames made two trips to play FGCU this spring. They started the semester by sweeping the two-time defending and four-time national champion Eagles Jan. 22-23 before ending it by being swept in Fort Myers, Fla., March 19-20.

"They are one of the most prestigious teams in DII, but if we want to be a national contender, we have to get through them, and I wouldn't want it any other way," Liberty fourth-year Head Coach Ben Hughes, who found out this week that senior forward Blake Flanders and junior goalie Dakota Cyhaniuk were named to the ACHA DII First Team.

Liberty's DII squad, which finished 30-3-1 and was ranked No. 1, has plenty of incentive going into this weekend's tournament.

"We've been waiting a whole year for this, which is crazy to think about," Hughes said. "Everyone is excited, and we've got a little more adrenaline. Everyone is going to raise their game and all the games are going to be fast-paced and intense. We just want to focus on ourselves and play our best game, play to our strengths and play fast because I don't think there are too many teams that can skate with us."