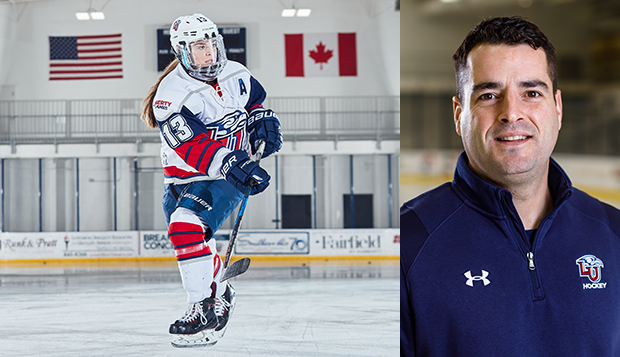 As he prepares the Lady Flames to contend for their third consecutive national title, starting Thursday in Minot, N.D., Liberty University ACHA Division I women's hockey Head Coach Chris Lowes was designated the 2020-21 ACHA DI Coach of the Year for the first time.

"I am honored to accept this award on behalf of my coaching staff and players," said Lowes ('02), who is in his fourth season at the helm of the Lady Flames after previously coaching Liberty's ACHA Division II men's team for nine seasons. "I am blessed to coach alongside dedicated coaches who invest in our players on a daily basis and challenge me to be better."

A native of Peterborough, Ontario, Lowes played for the Flames' highest level ACHA team for four seasons. Also Liberty's assistant director of events and facilities, he is in the process of completing his Master of Science degree in Sport Administration.

"Dana is an incredible hockey player, student, and teammate and is very deserving of this award," the ACHA said in its news release. "Dana's hard work and commitment are a big part of why she is recognized as one of the top defensemen in the ACHA"

McLeod was also one of two Lady Flames on the All-ACHA First-Team, joined by sophomore forward Yannick Truter, with graduate forward Vanessa DeMerchant honored on the second team. In all, 11 of the 12 first- and second-team selections came from the WMCH. Liberty, ranked No. 1 in ACHA Division I, defended its WMCH tournament title for the second-year conference, March 26-28 in St. Louis, edging second-ranked Minot State, 2-1, in overtime.

Riding a 10-game winning streak, with their only loss to Lindenwood, the Lady Flames (14-1, 10-1 ACHA) are seeking to join the No. 4-ranked Lady Lions as the second ACHA DI team to win three consecutive national championships in a row and four overall, after capturing its first in 2015.