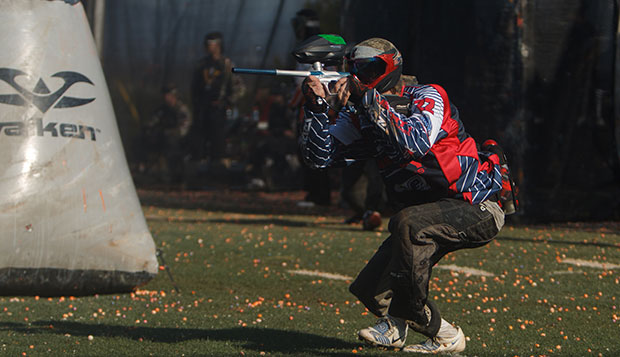 Jeremy Miller, a transfer from Massachusetts playing in his first match in a Flames uniform, leads the charge for Liberty in a preliminary victory for the Red team.

Paintball shells splattered all over Liberty University's Paintball Complex on Saturday morning and afternoon, turning the field featuring numerous inflatable bunkers into a bizarre-looking site for an Easter egg hunt.

The moving targets, namely players from 16 collegiate teams competing in the Liberty Flames Classic, event No. 4 in the MSCC Class AA series, were as elusive as rabbits and much more colorfully dressed, decked out in brazen colors representing their schools, and occasionally smeared with orange, pink, or yellow paint.

The action was furious, pitting teams in five-minute, five-on-five skirmishes, with players exchanging rapid fire from air-propelled weaponry while trying to capture the opposing school's flag.

"What I love the most is the adrenaline rush I get," said Aaron Thompson, the sophomore captain of Liberty's Red team. "It's a fast-paced game. You have to learn how to keep your composure and maintain that sense of urgency. The game is always changing. That's another awesome thing about paintball. You do have to be able to think quickly on your feet. If you lose bodies, you have to be able to adapt."

Thompson helped Liberty's Red squad to a 7-3 record and third-place overall finish, while its Blue team finished sixth out of the 16 teams.

"The Red team played really well," Flames head coach Todd Hoglund said, after it beat East Carolina Gold, Lynchburg College, George Mason, and UNC Charlotte in round-robin preliminary play before taking two of three matches from ECU Gold in the quarterfinals, being swept by eventual champion UNC Charlotte in the semifinals, and defeating ECU's Purple squad in the consolation match for third place. "Liberty Red was the No. 1 seed going into the playoffs and looking good all the way up to the semifinals. We just didn't adapt quick enough. (UNC Charlotte) got us out of our bunkers."

"There were a couple new teams," Hoglund said. "We hadn't played against Coastal Carolina before, hadn't seen West Virginia in quite some time and George Mason and JMU hadn't played in the past year or so. I was surprised with how well they played."

He said Thompson and Jeremy Miller, a transfer from Massachusetts this semester competing in his first match in a Flames uniform, helped lead Liberty's charge.

"Jeremy was very aggressive, which was awesome," Hoglund said. "He was doing what needs to be done, but being smart in doing it. He's pretty solid. He has a lot of potential. Aaron is definitely the leader on the field. We give them a basic game plan, but he could call an audible," like a quarterback in football.

The field was set up with an identical layout to that for the Paintball Sports Promotions national event held in Dallas two weeks ago. Soon, Hoglund will change it to the same setup that will be used at the National Collegiate Paintball Association national championships set for April 19 in Lakeland, Fla.

Though they graduated 12 players off last year's team, which placed third at nationals after finishing fourth in both of the previous two seasons, the Flames have hopes of finishing near the top of this year's field.

"We lost a lot of guys from our Class A line last year and this year's been a rebuilding year for us," Thompson said. "We're still not at the place where we were before, and we could have played better today, but we're definitely improving.

"Mostly, what we need to work on is communicating," he added. "To get to that next level, we want to further our game communication-wise. We want it to be like clockwork. We have nationals in three weeks. We still have time to up our game and keep preparing ourselves and keep our minds in it."

Hoglund said his players are still inexperienced in adjusting to what teams throw at them.

"The biggest thing we need to work on is knowing what to do when we're facing adversity, and varying up our game plan so we give teams a couple different looks," he said.

Liberty's seeding for nationals will be determined after its trip back to Canton, Ga., next Saturday for the SEC's Class A Event No. 2.