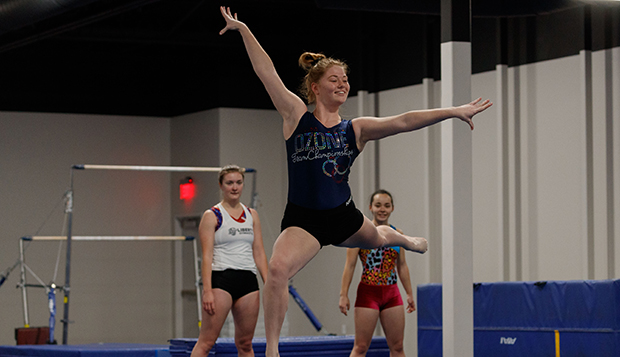 "It was great just to see everyone else in their element because it has been almost a year since we've been competing," Lady Flames freshman Abby Coleman said. "It was a great experience, great environment, and it felt as close to normal as possible."

"We got to come in and decorate the place, which was good team bonding," sophomore Audrie Pack added. "We still got the feel of a competition, being a little nervous, but still being able to do it in our home gym on stuff that we practice on every week."

Liberty Head Coach Tim Kappel said the spirit within the team helped make it as close to an actual competition as possible.

"They were really pumped up," he said. "There was a ton of energy. It was loud, it was fun. We all felt great about the event afterwards."

"Being in front of people was super energetic and just hearing everyone cheer us on was super fun," freshman Sophie Boone added.

The Lady Flames have made the best of the 2020-21 season, and enjoyed practicing in their new gym space on North Campus.

He does empathize with his team members who, due to COVID-19, have missed experiencing the thrill of victory and even the agony of defeat in a competitive collegiate setting.

"It's been a challenging year for everybody," Kappel said. "We're still feeling like we're in March of last year, when everything froze. It is hard, because you train to compete. We have a strong team right now that would have done very well this year and closed out the year last year well and gained all of that valuable experience. It's hard to work toward something when you're not as motivated toward an end goal like you're used to. But you still have to move on. You've got to keep going, as challenging as that may be. They really have had to rely on each other quite a bit more than in the past."

The down time from competition has allowed the gymnasts to form stronger relationships off the mat.

"It's been really cool to grow with the team, especially during the quarantine time we had coming back for the second semester," Boone added. "We got to do a lot of team bonding stuff and it was really cool to click with them all. It's been super fun and encouraging with the whole team just working together and constantly pushing each other to continue to get better."

Kappel hopes the intrasquad competition can serve as a springboard to help the team reach greater heights in the 2021-22 season.