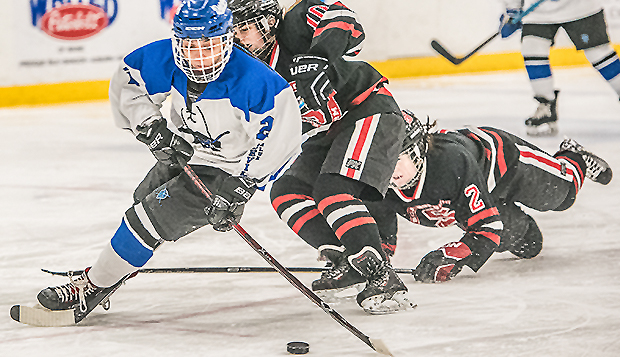 While it has yet to play a game this season due to COVID-19 shutting down 52 of 58 ACHA Division II women's programs across the nation, Liberty University's DII women's hockey team has remained active on the recruiting trail. Head Coach Rena Leone received commitments from three forwards in recent months — Madison Gaddy and Camille Sponaugle from Pennsylvania and Madison Conley from Maine — with three to four more recruits expected in the next several weeks.

"These three are definitely going to be huge assets to the team," Leone said. "Each is going to bring her own different leadership style. Madison Conley and Camille are very similar in playing style, and I think they will work very well together."

Gaddy, head captain of the Lehigh Valley Phantoms 19-under girls hockey team who also played for Easton High School in Saylorsburg, Pa., visited Liberty to practice with the Lady Flames and received an offer to play for the DII squad after coming off the ice.

"She came down in January and skated with us and we offered her a spot on the team and the next weekend she signed her commitment letter," Leone said, noting the signing was witnessed by the Phantoms' Head Coach Phil Naposi. "She has excellent leadership skills. She is a very strong player on the ice, but I definitely think she is going to lead more from in the locker room."

Conley, who played left wing on the Lewiston (Maine) Blue Devils' 2020 high school state championship team after shifting from defenseman to forward while playing on the Maine Gladiators travel team, has exceptional speed and will strengthen Liberty's offensive lines.

Sponaugle, a Philadelphia Jr. Flyers 19-under AA forward from Glen Mills, Pa., will play for the Lady Flames while pursuing a degree in biomedical sciences starting this fall.

"I chose Liberty because it feels like home to me," Sponaugle said. "The caring and supportive environment that Liberty provides will allow me to thrive both personally and academically."

"Camille has so much to offer both on and off the ice," he said. "On the ice, she has deceptive speed, a quick release shot, and is crafty with the puck. She has a tremendous work ethic, is loved by her teammates, and has been a pleasure to coach the past two seasons."

Liberty hosted a showcase at the LaHaye Ice Center in February, with its 12 current players competing against four U19 junior teams: Gaddy and her Lehigh Valley teammates, the Jr. Flyers and Sponaugle, the Piedmonht (Va.) Predators, the Tri-City (Md.) Eagles, and the Carolina (N.C.) Jr. Hurricanes.

Over the April 8-10 College For A Weekend (CFAW), Leone will welcome three more potential recruits, another Jr. Flyers player, one from Florida, and a goalie from California.

"If everyone who I've been talking to commits, we will have eight recruits coming in for the fall," Leone said, noting that would bring the Lady Flames' roster to 19. "We have five seniors this year, but only two are leaving."

Those two are defenseman Alexis Early and forward Anna Carlson. Senior forward Julia Hoffmeier is returning for a fifth year while forward Kiana Zeigler and defenseman Sarah LaPorte will both be continuing their studies in graduate school.

The Lady Flames will travel to Tampa, Fla., for their first and only official games of the year over the weekend of April 23-25, when they will play a two- or three-game series against the University of Tampa. They will be joined by Liberty's all-time DII leading scorer Brittany Hegele, who is taking this year off and plans to return in the fall for her senior season.

Then, during a virtual ACHA Coaches Conference from April 30-May 1, Leone and other ACHA DII women's coaches across the nation will find out how the league will operate during the 2021-22 season, after having the ACHA DII National Championships canceled for the second year in a row.

Madison Gaddy (laying on ice) poses with the Lady Flames DII team after a practice in January.