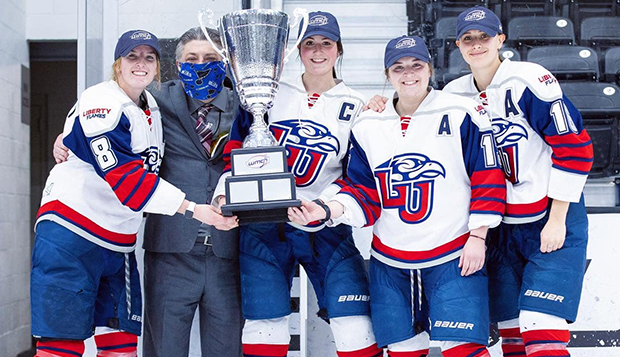 By winning its second consecutive WMCH Tournament title by repeating its 2-1 finals triumph over Minot State on Sunday in St. Louis, Liberty University's two-time defending ACHA Division I champion women's hockey team clinched the No. 1 seed for the April 15-19 National Championships to be played at Maysa Arena in Minot, N.D., home rink of No. 2-seeded Beavers.

The Lady Flames (14-1, 10-1 ACHA), who are riding a 10-game winning streak, will open pool play Thursday, April 15, against No. 4 Lindenwood, the only team to beat Liberty the past two seasons and the only one to claim three consecutive ACHA DI women's national championships, from 2008-10.

"The only game we lost this year was (the ACHA season opener) to Lindenwood," Lady Flames fourth-year Head Coach Chris Lowes said. "We've played them enough and know them well, but with the shakeup in the rankings from the start of the season to the end, on any given night, there could be a lot of upsets. Either way, we've got to be able to play five good games together."

On Friday, April 16, the Lady Flames will play No. 6 McKendree before challenging No. 5 Adrian College in a crossover game on Saturday, April 17, in a rematch of the 2018 ACHA DI National Championships final in the final round of pool play.

"I think we're still a work in progress," Lowes said. "Overall, we are pretty happy with where we're at and we match up fairly well with the teams we're going to see. Different teams offer different challenges and we are fortunate to have played every team that's going to nationals."

All three of Liberty's games in pool play will start at 5 p.m. EST. Besides McKendree, No. 2 Minot and No. 3 Midland — which Liberty shut out by 3-0 scores twice this season, including in Saturday's WMCH semifinals — comprise the other pool.

The top two teams in each pool advance to Sunday's semifinals, set for 2 and 5 p.m. EST with the finals puck drop on Tuesday, April 19, when the puck will drop at 8 p.m. EST.

The complete tournament bracket for pool play and the April 18-19 Final Four pairings is posted online and all 12 games will be webcast live by the ACHA.

Lowes is waiting to get medical clearance for a few players who were not able to travel to St. Louis for the WMCH tournament. He believes the Lady Flames have the depth needed and are battle-tested enough to make it to the ACHA Final Four for the eighth consecutive time — after last season's tournament was canceled due to COVID-19 — and to challenge for their fourth tournament title since 2015 by playing five games in five days.

"That has been a thought for us when it comes to conditioning and looking to the end of the season," Lowes said. "Along with COVID testing, conditioning will be a big factor at nationals this year. Things have been really good within our team this semester and we hope to have one more negative test for everyone before we fly to Minot."

Lowes likes the makeup of this season's roster, though he may not have as many reserves as he would like for such a long weekend.

"The chemistry's been good with a nice balance of veterans and underclassmen and all players are contributing to our success," he said. "We've had a pretty memorable season this year as a team (but) the national tournament is what you play for each year, and it is always our team's goal. The time has come, so we've got to make sure we dial in as a team and that the girls are in peak health and conditioning and get the rest needed to go in and perform."