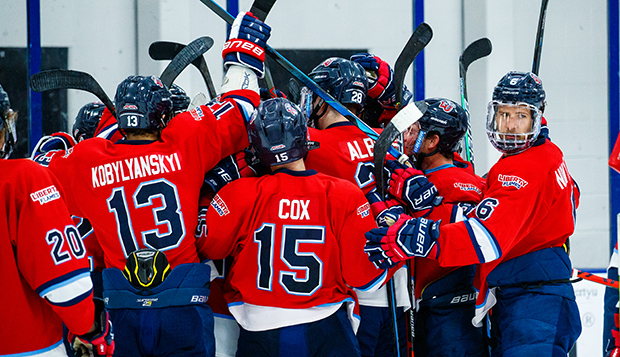 The Flames celebrate their 2-1 triumph over NCAA Division I Long Island on Jan. 22 at the LIC. (Photo by Andrew Snyder)

"I don't think we're too worried about where we're ranked going into it," Liberty Head Coach Kirk Handy said. "We're focused on our team and our guys and making sure that they are ready to go. It is an exciting time of the year and what you play all year to play for. Our guys will be ready to go and all of our focus will be on that first game."

The Flames have only faced two other teams this season who are also in the tournament — they were swept at No. 1 Adrian College on Nov. 12-13 and finished 7-1 against No. 5 Ohio University this semester.

Liberty was scheduled to host the Saints, who are making their first national tournament appearance in their third season in ACHA Division I, on Jan. 22-23 at the LaHaye Ice Center, but that series was canceled due to COVID-19 protocols, as were the March 19-24, 2020, ACHA DI National Championships in Frisco, Texas.

Handy said this 2020-21 season has had its share of adversity, and the Flames are eager to redeem it and contend for their first national title. Neither Liberty, in its last season in the Eastern States Collegiate Hockey League (ESCHL), or Maryville, which competes in Midwest College Hockey (MCH) had a conference tournament to play in this spring.

"We have had a lot of challenges to overcome this year with COVID and all that goes with it," Handy said. "This is a great opportunity to go out there and play some playoff hockey and to compete for a national championship."

They have added incentive to play in honor of the 11 players who did not return from last year's team, which had achieved a program-best No. 2 national ranking going into nationals after sweeping No. 1 Adrian.

Veteran forwards such as senior forwards and team captains Quinn Ryan, Brock Thompson, and Cole Gammer as well as Ryan Cox and senior defenseman Chaydan Lauber have played invaluable roles in setting the standard for the younger players and will be Liberty's leaders at nationals.

"Absolutely," Handy said. "They have been there multiple times before and they understand the intensity level and the focus it is going to take."

Liberty has yet to meet Maryville, which is coached by former University of Arizona player and assistant coach John Hogan.

"He's done a great job at Maryville," Handy said. "He has started multiple teams at multiple levels in the ACHA, very similar to what we have done here at Liberty, and is trying to grow the ACHA at Maryville in the St. Louis area."

While Handy and his coaching staff will analyze film of the Saints from this season, their emphasis will be on the way they approach the game themselves.

"At end of the day, our focus is going to be on our team, the way we execute and the way that we come to play," Handy said. "We want to control all the factors on our side we can control and not really worry about our opponent. We will study their tendencies but keep the focus on us and how we prepare for that game."

The winner will have a day off before challenging the first-round winner between Ohio and 12th-seeded Missouri State on Sunday at 11:15 a.m. EST. The Flames were scheduled to play a two-game home series against Missouri State on Feb. 12-13, but it was canceled due to an ice storm.

With limited seating available, all 15 games in the tournament will be webcast live by the ACHA. 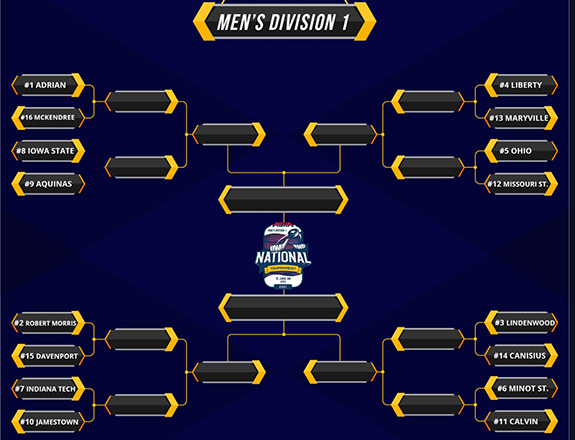