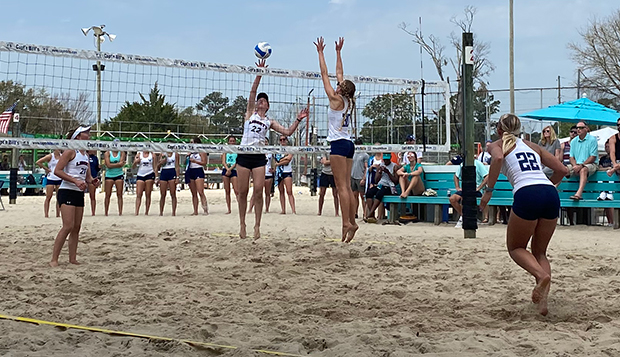 Liberty University's women's beach volleyball team competed for the first time in program history against two NCAA Division I programs over the weekend at an event hosted by UNC Wilmington that included a combination of NCAA and club teams.

"It was a really fun weekend and a big step forward for the girls," Head Coach Kaleb VanDePerre said after the Lady Flames fell to the College of Charleston, 4-1, and the host Seahawks, 5-0. "It was huge for the program. The girls represented the school well, did a good job connecting with the other athletes, and received a ton of praise for how they conducted themselves and played in the sand."

Against Charleston, Liberty's No. 3-seeded team of junior Jenae Baker and graduate Payton Carter pulled out a three-game victory over the Cougars, winning Game 3, 17-15.

"We were down 14-10 and managed to fight off three match points before winning in extra points," VanDePerre said. "It was a monumental win in our program's history. Overall, the scores were relatively competitive, and I think they were surprised by how strong we were for being a club program."

The fourth-seeded tandem of freshmen Riley Smith and Cara Lecklider and fifth-seeded pair of junior Lexi Kruse and sophomore Genessa Sirard both lost in three games after the Lady Flames' No. 1 and 2 seeds were swept in two.

"It was so nice to see how we stack up against solid NCAA DI programs and to watch our girls compete at the highest level against the best players we have ever seen in-season," VanDePerre said.

After being off over Easter weekend, the Lady Flames will travel to NCAA Division III Stevenson (Md.) University to face the Mustangs, a team it would have played last April before COVID-19 canceled the trip, and to challenge UNCW a second time. 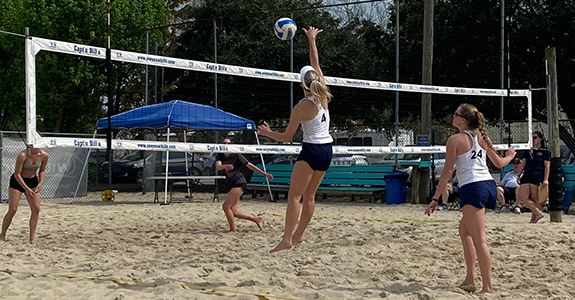