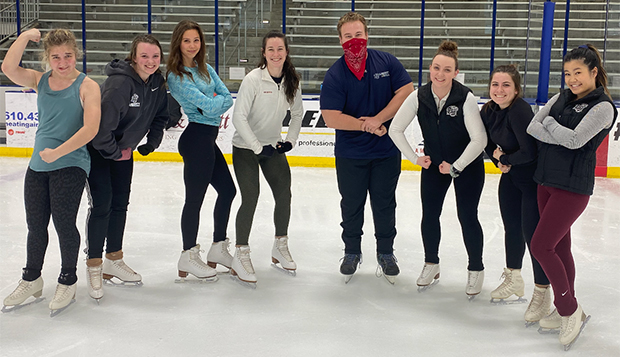 "We were pleasantly surprised with the outcome for all three teams," Head Coach Dawn Harter said, noting that a modified International Judging System (IJS) was used for scoring, rather than the standard 6.0 for collegiate events. "(Former Head Coach and current Club Sports Associate Athletic Director) Tatiana (Payne's) experience with the IJS scoring was a benefit to us. She was able to guide us in the right direction for each team."

The Lady Flames' three Team Maneuvers quartets will be moving on to the Intercollegiate Finals set for April 2-12, when they will compete virtually against the top four teams from all four sections (16 in all), with results posted by April 27.

Before then, Liberty will host an "Exhibition of Hope" ice show at the LaHaye Ice Center on April 24 from 6-8 p.m., featuring 18 individual performances as well as an extended routine by the Lady Flames' synchronized skating program.

"Each one will be skating to music of their choice that gives them hope," Harter said.

The show will be limited to 250 spectators with tickets distributed by the skaters.