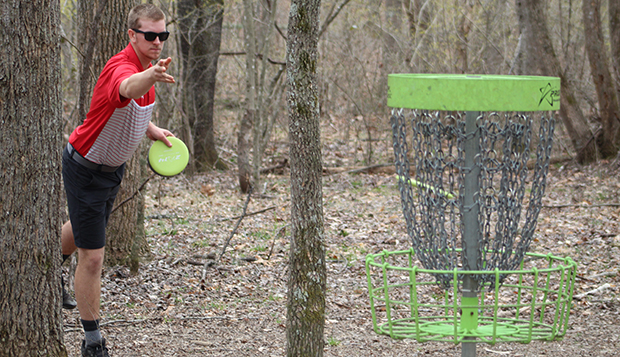 "After a beautiful first round, we had rough weather for Saturday's singles play, with thunder and lightning," Flames Head Coach Steve Bowman said. "Players had to sit out for 45 minutes at the (Hydaway) pavilion, and it was hard to get back into the rhythm. But they were familiar with their home course and played well. Dealing with bad weather on both days will prepare us well for whatever we my face at nationals."

Liberty's top-flight duo of sophomores Justin Rosak and Stephen Curry paced the field of 22 teams, winning by eight shots with a two-day total of 164 after one singles and two doubles rounds. Curry was the individual medalist in the singles round, firing an 8-under 52 on the Par 60 course.

The Flames' fifth-ranked team of graduate students Clayton Moore and Cameron Guidry, who also competes on Liberty's men's ultimate team, moved up the ranks to finish tied for second with Clemson's top tandem at 172. That was two shots better than NC State's A pair and three ahead of Liberty's C squad of senior Matthew Alexander and sophomore James DeFriese, who came in fifth at 175. The Flames' B team of junior Spencer Ellingson and senior Isaac Frazier finished sixth, one shot back at 176.

Also representing Liberty were the duos of junior Andrew Sherwood and senior Axel Routh (three-way tie for 13th, 195); sophomore Hunter Ayers and freshman Logan Wise as well as sophomore Carson Cole and freshman Noah Bailey (tied for 16th, 197); and junior Daniel Waid and freshman Luke Wilburn (18th, 199). Graduate Shannon Hons was the Lady Flames' only player available and she teamed up with men's sophomore Evan Olivio to finish with a combined score of 219.

Liberty's second-seeded tandem of Spencer Ellingson and Isaac Frazier shot a total of 176.