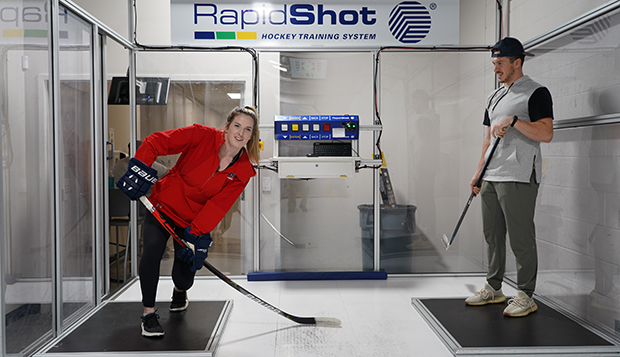 Earlier this month, a RapidShot Hockey Training System, the latest technology for use by its five ACHA men's and women's hockey teams, was installed between the gymnastics studio and the strength and conditioning room in Liberty University's Club Sports Complex.

"Along with the 1080 Sprint machine, our heart-rate monitors, and Hudl for video analysis, this (shooting booth) will give our athletes the opportunity to be the best they can be," said Liberty ACHA Division I women's hockey Head Coach Chris Lowes, also Club Sports' Assistant Director of Events and Facilities. "It's used by NHL teams and the top college programs. We are trying to be leaders and innovators in the ACHA and take our teams to the next level."

The shooting booth gives members of Liberty's five hockey teams an incentive to walk from the LaHaye Ice Center — which serves as the home base with strength and conditioning and athletic training rooms between the DI men's and women's locker rooms — to the Club Sports Complex. That is where the men's and women's wrestling, gymnastics, crew, and taekwondo teams train and all 35 of the Club Sports teams other than hockey do most of their strength and conditioning workouts.

"We're excited for the opportunity for all of our teams to be able to use it for our own training," Flames DI men's hockey Head Coach Kirk Handy said. "It's a great training resource for student-athletes, and it will help in the recruiting process for recruits to see the different resources we have for them."

Money donated toward Liberty's five hockey programs on the Nov. 17 Flames Giving Day helped cover the cost of the 35-foot by 15-foot shooting booth, as well as funding future mission opportunities, including the DI women's team's trip to Finland next season.

"When we had Giving Day in the fall, we had a couple projects people were giving toward, and this was one of them," Handy said. "We are very thankful for the alumni and supporters who gave, and for (DII men's hockey Head Coach and Club Sports Director of Recruiting and Varsity Club) Ben Hughes and (Vice President of Development) Jim Nichols and (Associate Athletic Director and Executive Director of Development) Mike Hagen from the Athletics side."

"There are a bunch of different modes that allow you to increase and decrease the passing speed, pick which target on the goal to shoot for, or do random selections," Lowes said, noting that there are also a number of different games and competitions that can be set up. "It's a simple idea, but it has tons of potential. You just shoot from the same area, but adjusting the variables of where you are shooting, it's really valuable."

He said RapidShot provides data analytics, which is what separates it from other shooting booths.

"It's all automated, and It just gives you a lot of data to look at and to really track progress," Lowes said. "Players are registered with their own account, and stats go on a national database that can be seen around the world."

He said many skating rinks around the country buy RapidShot systems and sell usage time, renting them out like a batting cage for baseball and softball players.

"It's a fun spin on putting in good work," Lowes said. "I think our girls will come up here and not realizing they're logging hours and putting in shots."

Lowes believes those players who use the shooting booth regularly will be able to fine-tune their shooting precision and apply it in games, making them even more efficient on attack as the top-ranked, two-time-defending champion Lady Flames prepare for the April 15-20 ACHA National Championships in Minot, N.D

"We just told our girls (Tuesday) at practice, all of those little things are the difference in your team moving on to the next round," he said. "It's dialing in your shots so you can be more offensively dangerous." 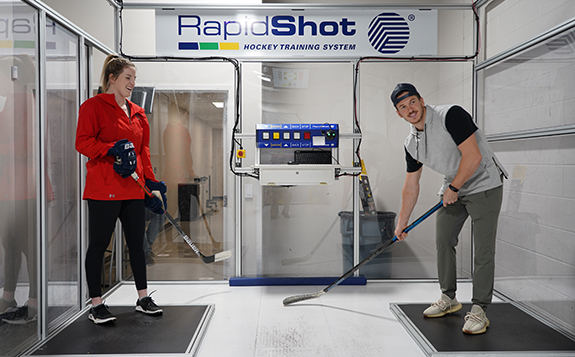