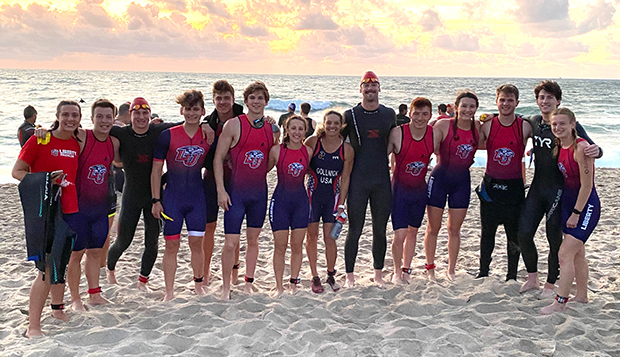 Racing in Florida for the third time this month, Wirsing won the 16-19-year-old female division of the 400-meter ocean swim, 10-mile cycling stage, and 3.1-mile run in 56 minutes, 13 seconds, followed by the runner-up showing of Lady Flames teammate Abby Ramberg in 1:07:19.

Fernandez, the younger sister of former Liberty men's swimmer Charles Fernandez ('20) — who will represent Guatemala for the second time in the modern pentathlon at the 2021 Summer Olympics in Tokyo — won the 20-24 female age group in 56:58 after completing her first triathlon at the March 8 Clermont (Fla.) Draft-Legal Challenge.

"After the first one, all I wanted to do was to race again, to try to beat my personal best and apply all that I've learned," said Fernandez, who has dealt with tendonitis in her foot and shin sprints but hasn't let them slow her down.

"It was a hard competition, but I ran through the pain," Fernandez said. "My nerves were a lot calmer and it was a great experience for me, really encouraging. I am excited to see where I can go with my training these next four years of college, to compete for God's glory and all of the blessings He's given me."

On an all-Lady Flames podium, junior Izzy Dotlich took second behind Fernandez in 58:56 followed by sophomore Laurel Eisnor in 1:02:36.

Youngs finished first in the 20-24 male age group in 56:31.50 after a controversial two-minute penalty for drafting while he passed other cyclists. Sophomore Peter Bagans placed second in that age group in 58:03.

After running cross country and track in high school, Youngs arrived at Liberty in Fall 2019 with no swimming and limited cycling experience. He finished the races last year before undergoing surgery in August to correct a bone disorder in his sternum. That sidelined him for the fall but he made a successful return to the sport this spring and is now nearly fully recovered and running, cycling, and swimming faster than ever before.

"It is now easier to breathe and I can take deeper breaths," Youngs said. "Last year, I trained really hard, but was still not where I wanted to be. After surgery, I dedicated a lot more of my life to it, as well as sleeping and eating better. I have such a great team and my friends on the team have really motivated me to want to be a better athlete."

Freshman Mackenzie Foy placed third in the women's duathlon, completing 1-mile and 3.1-mile runs around a 10-mile cycling stage in 58:28.

"We had a terrific few days in Fort Lauderdale," Flames Assistant Coach Todd Gollnick said. "The weather was super windy and played a factor in the race as the waves and swells were significant and challenged many of the competitors. Heather (Gollnick) had our team ready for the challenge and they all performed extremely well."

Ocean swimming was a focal point of Heather Gollnick's free triathlon clinic on Saturday, open to all racers as a way to give back and serve the triathlon community.

"We had an excellent turnout and Race Director (Robert Childers) was very appreciative that a five-time Ironman champion and members of our team led this clinic," Todd Gollnick said, noting that Fairley, Galbraith, and Bauserman volunteered to swim in the ocean with those who were fearful of the high winds and waves. "Attendees learned a great deal and our athletes had the chance to interact with other racers and share tips and answer questions."

He said the Flames and Lady Flames continued to build a family atmosphere focused around Liberty's goal of Training Champions for Christ. Team members held a sunrise worship service with music, singing, and team prayer.

"We also have had multiple opportunities throughout the trip where our student athletes can share their stories, challenges, victories and pray with one another," Todd Gollnick said. "It's awesome and a significant part of what this team is about." 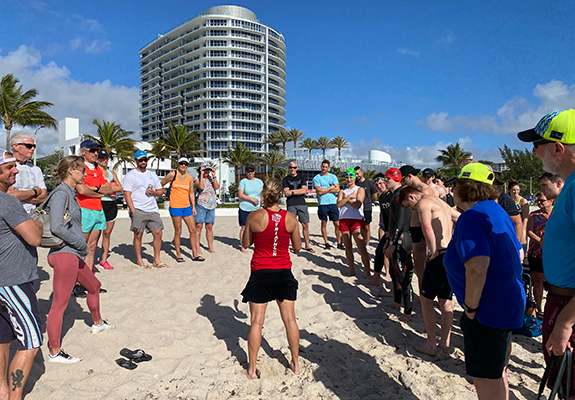