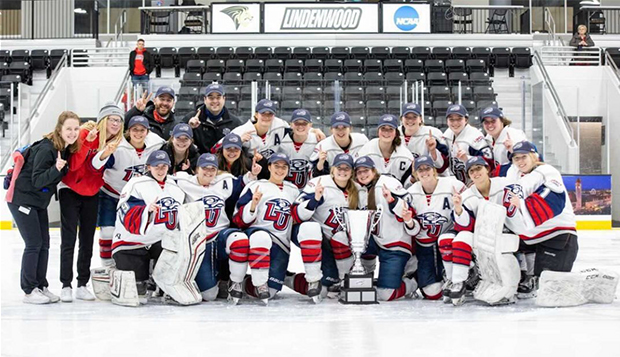 "It was a good game," said Lady Flames Head Coach Chris Lowes, who, due to injuries, had only eight forwards and six defensemen to work with, in addition to two freshmen goalies. "We haven't had to play from behind a lot this year, so it was good for our team to have to face some adversity and find a way to win."

Minot State, ranked third in the ACHA Division I, struck first with 13:42 left in the second period when sophomore forward Megan Norris capitalized on an odd-man rush, firing a shot from inside the right circle past Lady Flames freshman goalie Amanda Storey.

"We out-chanced them a little bit," Lowes said, noting the Lady Flames finished with 43 shots to 28 for Minot State. "They're a good team and put enough pucks on net to give Storey a good test. Our first period was our worst, and I was happy to get through the first period at 0-0. After that, we calmed down and looked confident playing the puck."

"In the third period, the clock seemed to be moving quickly," Lowes said. "We had lots of chances and you could see the urgency that the girls had. Smibert found a loose puck and it wasn't a pretty goal, but once we got that, we felt confident, like we had momentum."

With the two teams in four-on-four action after penalties on both sides, graduate defenseman Sally Hoerr hit the left post with a shot from the high slot. Storey made a clutch save at the 1:00 mark on a shot from the slot on the other end, with the Beavers working hard to punch in the game-winner.

After a scoreless first five-minute, three-on-three overtime, the Lady Flames converted the game-winning goal in the opening minute of the second sudden-death extra period.

Hoerr set up sophomore forward Yannick Truter on the right wing where she skated the puck in and slipped it past Ivanco from close range, sparking a spontaneous celebration on the ice with those players on the bench joining their teammates in the left corner.

"She used her speed to drive wide, which is something we thought we would be able to do, got back to the crease and tucked one in," Lowes said. "It was a big goal for her and her teammates to celebrate. We have so many offensive weapons that it's hard for teams to match up and defend against them all."

The Lady Flames prevailed by the same score as in last season's final against the Beavers, when Smibert netted the game-winner with 16.7 seconds remaining in regulation.

The seedings for the April 15-20 ACHA Division I National Championships in Minot, N.D., will be determined by this week's final rankings, with the top six teams qualifying. Liberty, as the two-time defending national champions and now two-time WMCH champions, will surely be the No. 1 seed. 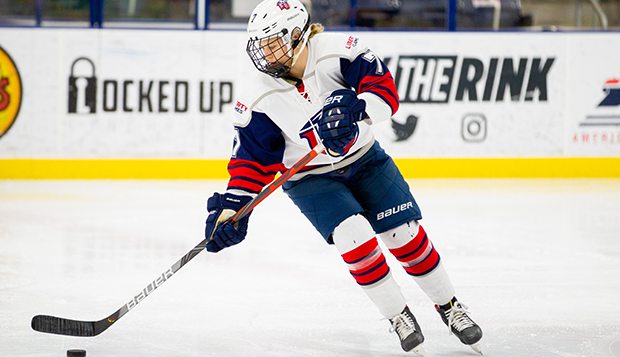