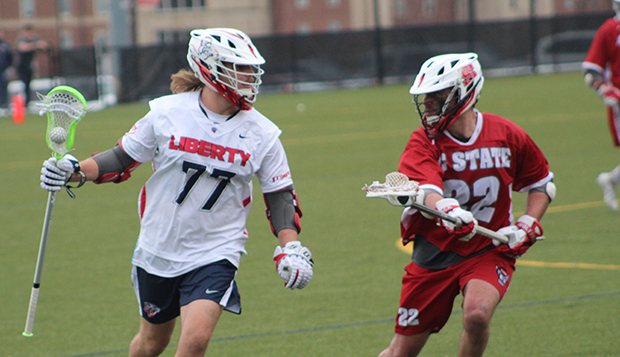 Liberty senior attack Jackson Miller sets up the offense against the Wolfpack on Saturday afternoon. (Photos by Ted Allen)

Liberty University's men's lacrosse team netted five straight goals in the first quarter and — after an hour-long lightning delay at the start of the second half — outscored North Carolina State 6-0 in the fourth quarter to put an exclamation mark on Saturday's 19-9 triumph at the Liberty Lacrosse Fields.

"That was a good showcase of what we are capable of," said Flames junior attack Cooper Branham, who shifted to midfield and distributed six assists. "We came out a little flat (after the delay), but once we got going again, it started to look smooth for us and we got some of our backups in and really showed our depth."

Already short three players due to COVID-19 protocols, the Flames (4-1, 2-0 Atlantic Lacrosse Conference) lost sophomore middie Ryan O'Connor to injury in the first half, but rallied around their reserves to fend off the Wolfpack (1-1, 1-1 ALC).

Sophomore attack Nathan Spears netted the first of his five goals on the day, finishing an assist from senior attack Jackson Miller (2 goals, 3 assists) with 7:04 left in the first quarter. Just 41 seconds later, Miller received a pass in the right crease from Branham cutting behind the cage and put away a point-blank one-timer to lift Liberty to a 2-1 lead. "Between some key injuries that we had and (Ryan) O'Connor breaking his arm pretty early in this game, we definitely needed to rely on some of our depth today and a lot of them showed up, which was great to see," Liberty Head Coach Kyle McQuillan said. "Cooper (Branham) took on a different role and did a really good job of it. Sometimes, (middie's) not as flashy and glamourous, but he deserves a lot of credit for creating a lot of opportunities."

Junior middie Cameron Carter (2G, 1A) answered back-to-back goals by the Wolfpack with a shot from the top left of the box early in the second quarter before NC State attack Brad Thompson snuck a backhander around Flames senior defender Mitchell Gorski in the right crease, using him as a screen to beat Flames senior goalie Ryan Reynolds (8 saves) and trim the gap to 6-4 with 9:48 left in the first half.

Senior attack Caleb Britton (2G, 1A) took an entry pass from Branham in the right side of the box and finished past Wolfpack goalie Seth Doyle into the upper netting before NC State pulled back within 7-5, prompting a Liberty timeout.

Flames junior faceoff specialist Cole Jankowsky (who won 18 of 26 attempts) lost the ensuing draw, but got the ball back on a Wolfpack turnover at midfield before Pinel capitalized with a bounce shot through the right side of the box. Then, with 3:23 left in the half, Spears received a pass from Britton cutting behind the right side of the cage and pocketed another shot to put the Flames up 9-5.

Spears started the second-half scoring by completing his hat trick with a sharp-angled shot from the left side, making it 10-5 with 12:50 left in the third quarter.

"Nate's a prime example of a guy we needed to step up," McQuillan said. "He has such a good fundamental step-down shot and the way they were playing defense gave us an opportunity to utilize him a lot."

The Wolfpack rallied for three consecutive goals in a span of two minutes, cutting the deficit to 10-8. Thompson capitalized on a man-up situation at the 11:19 mark before Sean Tobin converted on a fast-break in the right side of the box 33 seconds later. Less than a minute and a half after that, Thompson cut back from the right end line and bounced a shot past Reynolds.

Branham helped stop the bleeding by cutting down the right side of the box before threading a pass to Spears in front for a point-blank finish with 7:10 left.

"That worked out well," Branham said. "They were sliding adjacent today, so all we had to do was to go down the alley and draw that quick slide and he was open all day long for that overhand shot."

Thompson answered, completing his hat trick in the right crease with 5:13 left in the third quarter, before Carter restored the Flames' three-goal cushion by taking a feed from Branham at the top of the box, pivoting and firing for a 12-9 advantage. Miller later crashed through the left crease for a spectacular goal to end the third-quarter scoring.

Spears struck again at the 10:47 mark, stretching the edge to 16-9. Then, with 4:52 remaining in regulation, freshman middie Ryan Merbach drove around the back of the cage and scored on a wraparound in the left crease. Just over a minute later, sophomore attack Mark Rolewicz put away a pass from freshman middie Stephen Westlake before sophomore middie Jacob Gasterland capped the scoring off Branham's sixth assist.

Liberty has next weekend off to celebrate Easter before traveling to ALC member West Virginia the following weekend and Clemson, S.C., the weekend after that. It will then host Virginia Tech for its Senior Night on April 24 before staging the inaugural ALC Tournament, April 30-May 2 at the Liberty Lacrosse Fields. 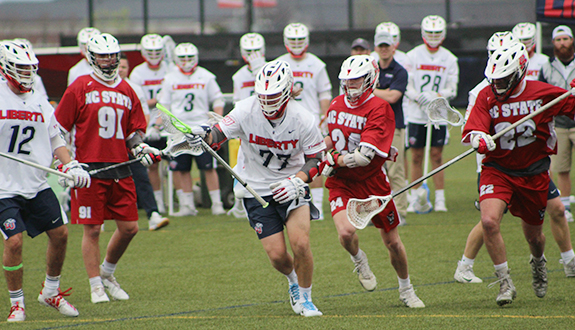