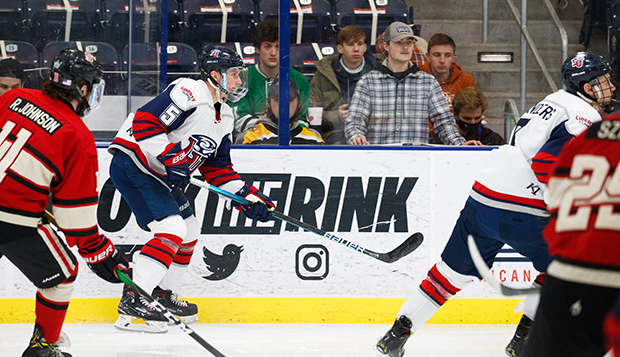 Liberty University's ACHA Division II men's hockey team, which swept Florida Gulf Coast University (FGCU) in its Jan. 25-26  spring semester series opener in Fort Meyers, Fla., returned to the Sunshine State over the weekend, only to be swept by the Eagles in Friday's and Saturday's regular season-ending series at Hertz Arena.

The Flames (8-7-3, ranked third in ACHA Division II) scored first in the opener when freshman forward Roman Lamoureux finished an assist from freshman defenseman Stephen Guadalajara just 1 minute and 1 second after the faceoff. But although Liberty outshot eighth-ranked FGCU, 33-29, the Eagles (8-5) shut the Flames down for the final 59 minutes in a 3-1 victory.

FGCU forwards and leading scorers Dylan Cantwell and Brandon Beard scored the tying and go-ahead goals in the second period before Liberty pulled junior goalie Dakota Cyhaniuk, and Eagles forward Wyatt Engelmann capped the scoring with an empty-netter in the final 1:19 of the third.

In Saturday's rematch, Cantwell opened the scoring with 2:28 remaining in the first period before Flames senior forward Blake Flanders tied it up off an assist from junior forward Daren Carter with 15:39 left in the second. Power-play goals by Seth Cohen and Jack Cohen, the Eagles' third- and fourth-leading scorers, put the Eagles back on top in the first half of the second period before sophomore forward Luke McFarlane cut the deficit to 3-2 at the 1:49 mark by finishing a feed from Lamoureux.

FGCU extended its lead to 4-2 early in the third before Flanders trimmed it to 4-3 with his power-play goal off assists from senior forward Michael Niederer and McFarlane. Cantwell padded the Eagles lead to 5-3 before Flames senior forward Tim Doe brought Liberty back to 5-4 off assists from Lamoureux and freshman defenseman Daniel Hauke with 13:52 remaining in regulation.

However, despite outshooting FGCU 40-29, Liberty was unable to net the equalizer. Both teams converted 50 percent of their power-play opportunities with the Flames going 2-for-4 and Eagles 3-for-6.

Liberty will host the University of Massachusetts in a three-game exhibition series at the LaHaye Ice Center this weekend, with games set for 7 p.m. on Friday and Saturday and 1 p.m. on Sunday. That will be the Flames' last action before traveling to Bismarck, Fla., for the April 15-20 ACHA DII National Championships.