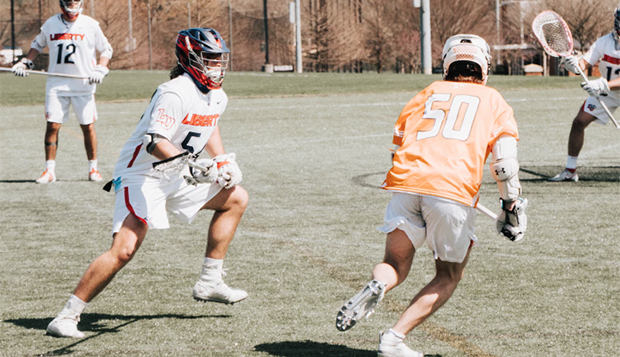 "Ryan O'Connor really stepped up for us today and Ryan Reynolds showed heart and took over, which was a big reason why we never let Tennessee come close to tying it up," Flames Head Coach Kyle McQuillan said. "Offensively, we were a little inept today. We've got an offense we feel can put up close to 20 goals in every game."

After opening a 3-0 advantage by the end of the first quarter, McQuillan said Liberty (2-1) did not make the most of its chances to put the Volunteers (1-3) away.

"I wouldn't say we underestimated Tennessee, but we absolutely didn't play to the level I expected," he said. "We need to get out of the habit of playing to the level of our opponent and to just play our game, to stay focused on what we've practiced and what we know to work for us and execute it."

The Flames extended their lead to 7-3 by halftime before being outscored in the third quarter, 4-3. As in Saturday's 14-11 loss to Georgia Tech, time of possession weighed heavily in favor of Liberty's opponent.

"That third quarter, in 15 minutes, we might have played offense for a couple minutes," McQuillan said. "We would make a save or create a turnover and give it right back. Some of the situations were definitely created by Tennessee, but we weren't doing ourselves many favors by valuing and capitalizing on our possessions."

In a low-scoring fourth quarter, Liberty ran out most of the final three minutes, padding its advantage to four goals when O'Connor sliced through the Tennessee defense and assisted senior attack Caleb Britton's third finish in the left crease.

"We never relinquished the lead, but as a coaching staff, we were frustrated with our inability to take control," McQuillan said. "We need to stop relying on individuals to come through in the clutch and rely on our team and our systems to work. To Tennessee's credit, they created a lot of opportunities and were able to keep it close and make it more of a game. They showed a lot of heart today and played with a lot of tenacity and represented their team well."

Junior faceoff specialist Cole Jankowsky took the majority of Liberty's draws and won 10 out of 21.

He said Sunday's spirited challenge from Tennessee was a sign of what is to come for Liberty, the preseason favorite in the first-year ALC, started last summer as an offshoot of the SouthEastern Lacrosse Conference (SELC).

"The cool thing about the MCLA and the new ALC is that there is more competition, more competitive games, and a little more parity throughout," McQuillan said, noting that North Carolina State upset Virginia Tech, both former SELC members, for the first time in its season-opener Saturday.

The Flames (2-1) will host the Wolfpack (1-0) in their ALC home opener this Saturday at 1 p.m. at the Liberty Lacrosse Fields.

"We need to refocus here and get back on track for what is going to be a pretty heavy ALC schedule over the next few weeks," McQuillan said, noting that Georgia Tech was the first SELC team to start play this weekend, sweeping Tennessee and Liberty. "Right now, the ALC is the only conference in the MCLA to have a tournament, which has created an opportunity for our guys to compete for something (the inaugural ALC Tournament Championships set for April 30-May 2 at Liberty) and to potentially be a part of the (May 12-14) National Invitational in Round Rock, Texas."

The Flames and Volunteers pray together after Sunday afternoon's game in Knoxville, Tenn.