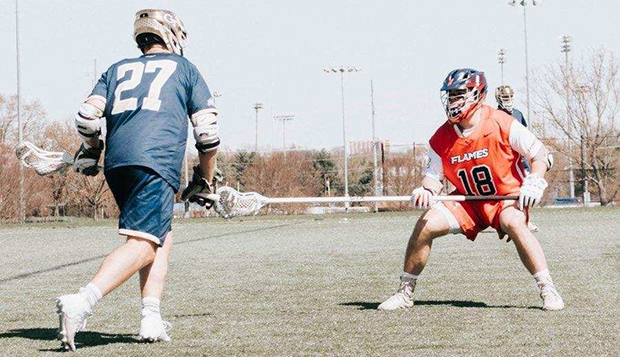 Liberty University's men's lacrosse team and Georgia Tech battled back and forth Saturday afternoon at the University of Tennessee before the Flames sustained their first regular-season loss to the Yellow Jackets, who used an aggressive 10-man ride and disciplined attack to emerge with a 14-11 win.

Georgia Tech, a perennial MCLA power in the SouthEastern Lacrosse Conference (SELC), was coming off a 17-5 rout of host Tennessee in its season-opener on Friday night while the Flames (2-1, 1-1 MCLA) had defeated NCAA Division II Walsh University in their home opener last Saturday.

Liberty was successful in running its 10-man ride, creating turnovers that led to its first two goals in the first quarter, which ended tied at 2. The Yellow Jackets erased a 5-4 halftime deficit by outscoring the Flames 5-2 in the third quarter and 5-4 in the fourth.

Liberty Head Coach Kyle McQuillan said the game came down to Georgia Tech being more tenacious at picking up ground balls and disciplined in running its offense.

"Georgia Tech won the ground ball battle and was a lot more composed and calculated when it came to loose balls and possessions," he said. "They came out and executed their game plan very, very well. They were very effective on the offensive side of the ball and got the best of us with their 10-man ride, which created a lot of turnovers."

The Yellow Jackets also won the majority of faceoffs and were effective at controlling the tempo and managing the clock once they had seized the lead.

"They did a much better job of possessing the ball and taking away our opportunities," McQuillan said. "We've got one of the best offensive groups in the country, but when we are not able to play offense, we can't take advantage of it, and Georgia Tech did a fantastic job of limiting our opportunities. They did a good job taking possessions late into the shot clock, and didn't give us a lot of time to get into a rhythm on offense."

He said the Flames hurt themselves with costly turnovers on attack and by failing to clear rebounds of Georgia Tech shots.

he credit goes to them, but we do recognize we were a bit of our own worst enemy today," McQuillan said. "We shot ourselves in the foot with turnovers, and Georgia Tech capitalized on a lot of second chances."

He expects the Flames to learn from the loss and to be better prepared for the rest of the regular season before possibly having the chance to meet the Yellow Jackets again at the eight-team MCLA Invitational, set for May 12-14 in Texas.

"As frustrating as it is, we're going to grow from this and use it as an opportunity to showcase some of the areas we need to improve on," McQuillan said. "We were two pretty evenly matched teams, but what it came down to was Georgia Tech being more disciplined and methodical, sticking with its game plan and being more disciplined."

Senior goalie Ryan Reynolds made 13 saves as well as allowing 13 of the Yellow Jackets' 14 goals.

The Flames will be back in action on Sunday when they face the host Volunteers, with the first faceoff set for 1 p.m.

"We've got to bounce back and have short-term memory, and we are focused on a game tomorrow that counts toward our playoff seeding and (Atlantic Lacrosse) Conference standings," McQuillan said.