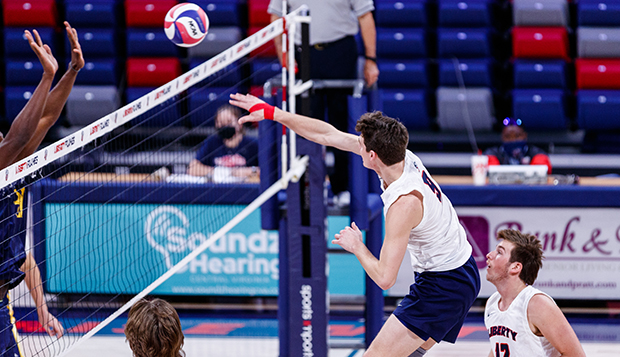 Flames junior outside hitter James Morton spikes off a set from Tommy Speelman at Liberty Arena. (Photo by KJ Jugar)

Liberty University's men's volleyball team experienced a spring break road trip to Tennessee over the weekend, when Head Coach Kaleb VanDePerre had plenty of opportunity to experiment with his offense in two lopsided sweeps of host Milligan University, by 25-8, 25-19, and 25-15 scores on Saturday and 25-11, 25-16, 25-21 counts on Sunday.

"It is tough sometimes not playing down to your opponent, but championship teams don't do that," VanDePerre said after the Flames improved to 5-1 and dropped the Buffaloes to 1-6. "We came out strong with our starting group (on Sunday) and said, ‘Let's play clean and not underestimate them from (Saturday).'

"In Game 1, we came out really well, looked sharp, and passed and defended well, but got a little sloppy after that," he added. "I was 100 percent pleased with the effort in Games 2 and 3 and we were able to finish a tight third game."

Like Carolina University (0-10), which it swept in Winston-Salem, N.C., on March 5 and Wednesday at the new Liberty Arena, Milligan has yet to win a game in its six losses, with its only victory coming against the University of Tennessee's club team.

"Carolina would have beaten that team," VanDePerre said. "So we put a few guys in positions they don't normally play in and it was cool to see us implement a few different offenses."

VanDePerre said the team bonding that occurred over the weekend, on and off the court, was just as valuable as the playing experience they took away.

"Overall, it was good for the guys to travel," he said. "They got to hang out and keep building that community. Any opportunity we have, whether the competition is really high or not — in this season we're in — we enjoy the opportunity to eat dinner and enjoy as much normalcy as we can."

He expects the Flames to meet some higher-level competition when they play their closest ECVA rival, Virginia Tech, on March 26 before traveling to Buena Vista, Va., on March 30 for a rematch of their only loss against Southern Virginia University. Finally, on April 2, Liberty will compete against the Hokies and a University of Virginia alumni team among others at the East Coast Classic in the Indoor Sports Center in Virginia Beach.

"We are excited to play Virginia Tech and SVU and to finish up with a nice tournament in Virginia Beach," VanDePerre said. "The guys will get in the sand after that one, starting April 9."

The Lady Flames' beach volleyball team will travel to Due West, S.C., March 19-20 to open their season with matches against host Erskine College and St. Andrew's (N.C.) University.