Flames rally from behind, scorch Cavs' nets in home opener 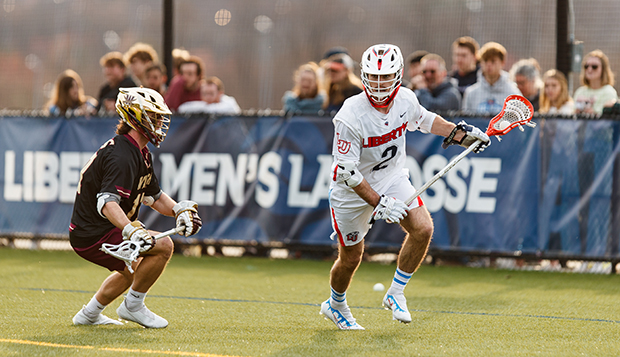 "First half, it took us a little bit of time to get in the groove of things, but second half, we just played really smart, head-up lacrosse," Flames Head Coach Kyle McQuillan said. "The possessions were timely, shooting late in those possessions to take a lot of time off the clock."

The visiting Cavaliers (0-4) seized a 3-0 lead in the first five minutes of play before freshman midfielder Keaton Mohs (3 goals) started the scoring for Liberty (2-0) by unleashing a shot from the top right side of the box. Junior attack Cooper Branham trimmed the deficit to 3-2 by taking a pass from junior middie Cameron Carter and ripping a bounce shot past Walsh goalie Patrick Cuddihy before senior attack Jackson Miller (3 goals, 3 assists) netted the equalizer at the 4:59 mark off an assist from sophomore middie Remy Newton.

Brent Mitchell lifted the Cavs to a 4-3 lead a minute later and maintained it until Mohs made a spectacular maneuver from behind the left post and pocketed a short-ranged shot with 10:46 left in the second quarter. Then, with 8:23 remaining in the half, Miller worked the ball around the back of the cage before finding Ryan O'Connor open in the right crease for a point-blank finish and the Flames' first lead at 5-4.

"Jackson's (Miller) kind of the quarterback of that offense," McQuillan said. "He understands the game really well and how to manage the pace. He can finish, he can shoot, but one of his best skill sets is just his vision and setting up other guys and today was a good example."

Walsh retied it with a shot from the perimeter at the 8:09 mark before senior attack Caleb Britton (4G, 1A) emerged from behind the cage and put Liberty back on top as he crashed into the left crease with 7:16 left in the half.

Cavaliers middie Marcus Brown (4 goals) retied it at 7-7 with 11:40 left in the third quarter before Britton put the Flames back in front off another assist from Miller with 10:35 to go and O'Connor gave the Flames a two-goal cushion for the first time less than a minute later.

However, Brown trimmed it back to 9-8 with 8:52 left by finishing a running shot down the right side of the box. Moments later, Liberty goalie Ryan Reynolds (14 saves) dug up a Brown shot that beat the shot clock through traffic before Miller put the Flames back up by two on the other end, 10-8.

"(Reynolds) provided the big swing in momentum," McQuillan said. "We continued to score and there was one series where he made three saves in a span of 10-15 seconds. That is just a huge confidence boost for everybody, just a great job by him holding down the fort on the defensive side."

Then, with 3:33 left in the third, after Reynolds made a save, he sent an outlet pass to Newton near midfield, where he chased it down and accelerated through Cavaliers territory before threading a shot past Cuddihy from the top of the box, boosting Liberty to an 11-8 lead. At the 2:18 mark, Miller came out from behind the left side of the goal and finished with a shot into the upper netting to make it a 12-8 contest.

Flames senior defender Mitchell Gorski picked up a ground ball on the right wing and fed Britton for a fast-break finish just seconds before the end of the third quarter, extending the Flames' advantage to 13-8.

Early in the fourth quarter, with the Flames on a man-advantage, Mohs received a pass from Britton at the top of the box and rifled a top-shelf shot past Cuddihy, for a commanding 14-8 Liberty lead. With Walsh cycling on attack, Reynolds made a point-blank save of a shot by Sully Dowling in front and Roman Smoot from the left side.

Brown finally beat Reynolds with a shot to the top right corner with 3:01 remaining in regulation, ending the Cavaliers' scoring drought that spanned more than 20 minutes between the third and fourth quarters.

The Flames were originally scheduled to face Indiana University on Saturday, but COVID-19 restrictions prevented the Hoosiers from traveling. First-year Atlantic Lacrosse Conference (ALC) member East Carolina University was Plan B, but the Pirates just got clearance to start up their season last week. McQuillan heard about Walsh from O'Connor, whose brother, John, is a junior defender for the Cavaliers and let him know that their opponent for this weekend had canceled as well, due to a case of COVID-19.

"It was a last-minute Hail Mary," McQuillan said. "Walsh is not a team we had any familiarity with. I told him any time you play your sibling, these games matter because for the rest of your life, you're going to have that over him, depending on who won. Fortunately, we were on the right side of that today."

Liberty will travel to Knoxville, Tenn., next weekend to challenge SELC power Georgia Tech on Saturday before facing host Tennessee, a former Northwest Region rival and fellow charter member of the ALC.

"Georgia Tech is a team we have had a strong rivalry with over the years and just because they're not in our conference any more, that's not going to change much," McQuillan said, noting it will be the Yellow Jackets' season-opener. "That's definitely an advantage we can take into that game." 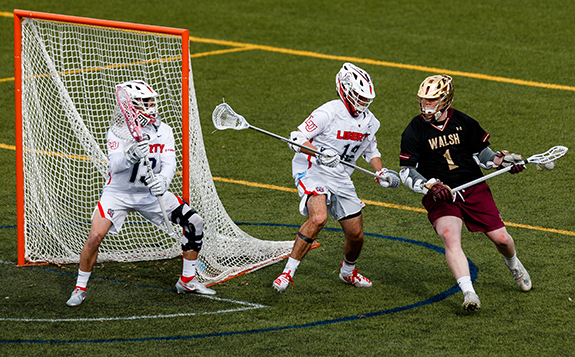