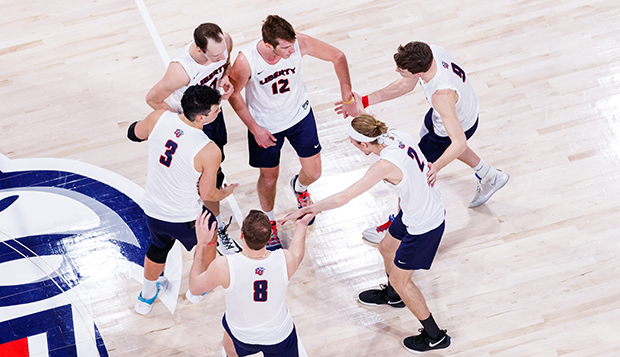 "The energy was a lot higher, so that was a really good experience," said Flames senior outside hitter Sean Taggart, who contributed 7 kills and two blocks. "We haven't played them in a while, so it was good to play against some guys from where a lot of our teammates are from (Pennsylvania). It was fun."

Junior outside hitter James Morton spiked the first of his 17 kills for the match and served a winner to draw the Flames even at 2-2 in Game 1 before one of junior middle blocker Luke Marine's three stuff blocks on the night gave them their first lead.

Marine and senior outside hitter Sean Taggart spiked kills off assists from junior setter Tommy Speelman and Morton and junior outside hitter Josh Knapp (11 kills, 2 blocks) earned side outs with spikes off LBC blocks at the left side of the net. A stuff block by Knapp and two spike kills by Taggart tied the game at 14 before a kill and another stuff block by Knapp stretched Liberty's lead to 18-15.

Taggart made a diving dig save and got up in time to block a Chargers spike for a winner before Knapp served an ace to put the Flames up 20-17. Speelman later served on game point and made three sets and a saving dig before Lancaster spiked long.

Liberty opened a 7-3 lead in Game 2 after a spike by Knapp from the right side before a Taggart cross-court kill from the left made it 8-4. Morton sandwiched two kills from the left side around a winner by sophomore Tait Lapham (3 kills, 2 blocks) in the middle as the Flames extended their advantage to 16-6.

Morton spiked another kill assisted by Speelman after a solid service receive by junior libero Cross Edwards before a back-row dig winner by Taggart helped the Flames put away the second game.

"We didn't pass as well as we wanted to to start, but Tommy ran a good tempo offense today and Cross was huge tonight," Taggart said. "They had a few tough servers and really led us in the back row. (Speelman) leads us in the front row and keeps us all happy."

A spike kill by junior opposite hitter Cody Reinsma lifted Liberty to a 16-15 lead in Game 3 before a Marine kill off a short set from Speelman gave the Flames an 18-16 edge and kills by Morton over LBC blocks made it 19-17 and 20-18. A Morton kill off a block at the right pin put Liberty back on top, 21-20, before the Chargers retied it and seized a 22-21 advantage en route to the extra-point win.

Later, with Speelman serving, a stuff block by Lapham and kill by Morton increased Liberty's lead to 21-15 before LBC closed within 23-22, prompting Head Coach Kaleb VanDePerre to take a timeout. The Flames responded with a spike kill by Knapp off a block on the right side and a Chargers error on match point.

Liberty will visit Milligan (Tenn.) University this weekend for two matches against the NAIA Buffaloes on Saturday at 5 p.m. and Sunday at 1 p.m.

"We are definitely excited to go travel," Taggart said. "We're going to play at (Southern Virginia University) in March and we are gearing up a big tournament in Virginia Beach in April that will take the place of nationals," after the National Collegiate Volleyball Federation (NCVF) canceled its national tournament for the second year in a row due to COVID-19. 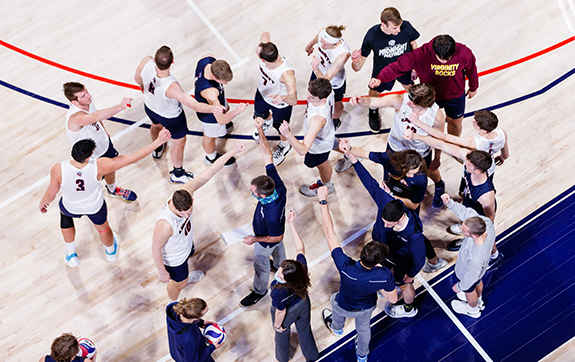 The Flames huddle as a team on the sideline after Wednesday night's win in the Liberty Arena.