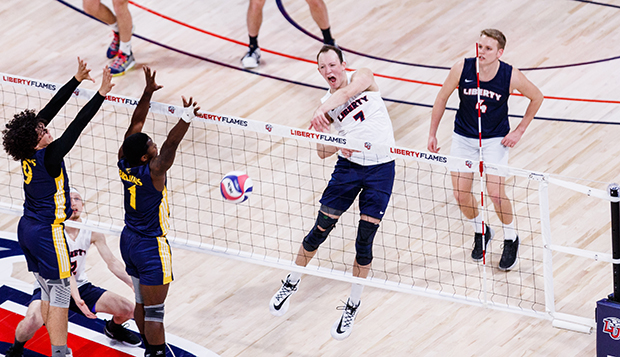 Joshua Knapp puts down one of his 15 kills against Carolina on Wednesday in the Liberty Arena. (Photos by KJ Jugar)

"It's a beautiful facility," said Flames 6-foot, 8-inch junior opposite hitter Josh Knapp, who racked up 15 kills, two blocks, and two aces to spark the attack. "We had practiced here on Monday, but it was our first time playing a match. (Junior setter) Tommy (Speelman) was really spreading the ball out well and giving me a lot of options with one-on-one blocks."

Liberty (2-1) swept the Bruins (0-10) for the second time in less than a week after winning in Winston-Salem on Friday.

"They have a brand new program, so it's great that we get to play them and just building relationships on the court," Knapp said. "All of those guys were just having fun out there. It was a great experience, just playing as hard as possible to keep our focus on our side of the court."

"We got complacent, but we made plays when we needed to to win," Flames Head Coach Kaleb VanDePerre said. "We miss having more fans and needed to create that energy out there. Josh and Sean saved us a lot and played really, really well."

After the DI team's sweep of the Bruins, Liberty's DII squad also defeated Carolina in a single game, 25-21, sparked by the serving and back-row hitting from sophomore outside hitter Tyler Wemple.

The Flames DI and DII teams will be back in action at 6 and 8 p.m. this Friday when they host Lancaster Bible College in the LaHaye Multipurpose Center.

"We expect that to be quite a battle," VanDePerre said. "Then, we'll take the troops on the road and test them out."

"We're excited to travel this weekend," Knapp said. "We're expecting a good match and just want to keep to our game plan of getting to our middle sets so we can spread out our offense and get to the pins. We're just hoping to play whoever we can and see how we match up and play our hearts out." 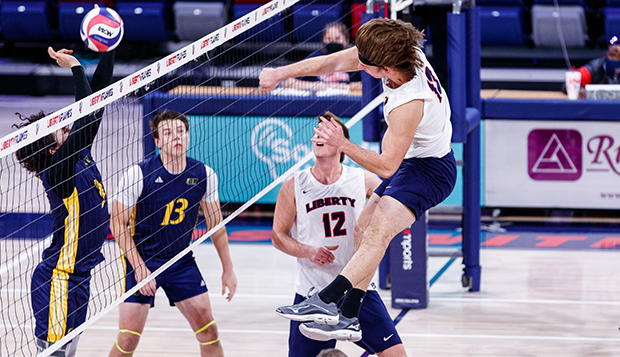 Flames junior outside hitter Logan Spieker spikes one of his three kills against Carolina.