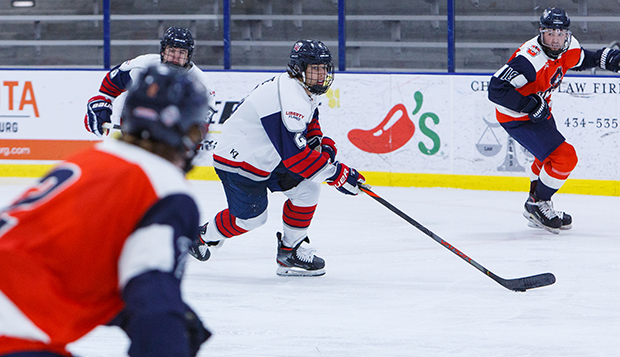 Junior forward Tim Doe skates the puck out of the Flames' zone in an Oct. 23 showdown with Mary. (Photo by Chase Gyles)

Senior goalie Dakota Cyhaniuk made 46 saves and senior forward Blake Flanders scored the game-tying goal with just over six minutes remaining in regulation as Liberty University's No. 2-ranked ACHA Division II men's hockey team emerged with a 1-1 tie against top-ranked University of Mary on Friday night near St. Louis, at Lindenwood University's Centene Community Ice Center. However, on Saturday afternoon, the Flames (8-5-3) suffered a 5-2 upset to the No. 3 Lions in their home den.

The Marauders (29-2-6), who feature the top six scorers in ACHA DII by virtue of having played more games than any other team in the nation, struck first just 3:15 into the first period. Andrew Huber, who ranks seventh among Mary's players and 10th in the nation, scored off assists from Johnny Witzke and Alexander Flicek.

Flanders, who ranks 22nd in ACHA DII with 15 goals and eight assists in 16 games, netted the equalizer off an assist from junior forward Darren Carter.

Mary outshot Liberty by a 47-30 margin, including a 24-9 count in the third period. Neither team scored in a five-minute overtime period, when the Flames outshot the Marauders, 4-2.

Liberty scored the first and last goals in Saturday's game against No. 3-ranked host Lindenwood, but allowed five different Lions to score in between to exact a measure of revenge after dropping two of three games at the LaHaye Ice Center on Feb. 19-21.

Trevor Granzow put the Flames up 1-0 off assists from Carter and Daniel Hauke just 2:33 after the opening faceoff before Roman Lamoureux capped the scoring with 6:28 left in the third period off assists from Peyton Nash and Maxx Mitchell. Earlier in the third, after being tripped by Lindenwood defenseman Cameron Seto on a breakaway, Flames junior forward Tim Doe had his penalty shot stopped by Lions goalie Trever Osbourne.

Liberty will return to action March 19-20 when it takes its second trip to Fort Meyers, Fla., to face Florida Gulf Coast University. The Flames swept a two-game series against the Eagles to open the spring semester.