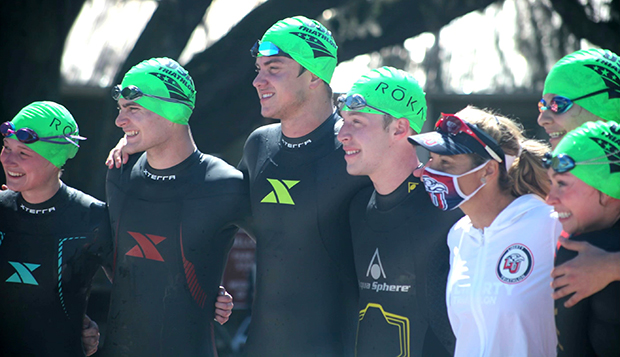 Triathletes line up with Head Coach Heather Gollnick (in mask) for the start of the 750-meter swim. (Photos by JJ Bagans)

Liberty University's triathlon team traveled to the Clermont (Fla.) Draft-Legal Challenge this past weekend for two days of action-packed racing against some of the top triathletes from around the United States. Eight men and 10 women competed for the Flames and Lady Flames, respectively.

"This race features some of the best under-25 elite racers in the country," Liberty Head Coach Heather Gollnick said. "Mark Fairley returned with a target on his back and it was amazing to see him step up and meet the challenge. Both days he left nothing back and turned in two incredibly dynamic performances."

Finishing in the top three overall gives Fairley the opportunity to obtain his pro card, an elite distinction that he will consider in the coming weeks with insight from Gollnick, a five-time Ironman triathlon champion.

"I was blessed to be able to have a second-place finish on both days of the male EDR race," Fairley said. "Earning my pro card two times back to back gives me confidence heading into my future triathlon career. I am super thankful to my coaches, and teammates for their support. After Day One, I felt sick, tired, and sore. But God gave me extra strength Sunday and allowed me to compete well two days in a row."

Joining Fairley in both EDR races was sophomore David McCurdy, who bettered his time from last year by several minutes to finish in 1:03:23.5 on Saturday and 1:01:37 on Sunday.

"Taylor has done nothing but improve in all facets of her racing each year, and had another tremendous effort this weekend," Gollnick said.

"Izzy had an amazing race this year," Gollnick said. "She has been working incredibly hard and learned from last year what it takes to stay in the mix in this fast-paced draft-legal format. She dropped several minutes off last year's time, and I was so proud of her effort."

Wirsing, who will also compete in this Saturday's Junior Elite 16-19-year-old race in Sarasota, Fla., sanctioned by USA Triathlon, rounded out the Lady Flames' EDR competitors, finishing in 1:15:06 on Saturday and 1:12:53 on Sunday.

Sunday was also highlighted by the Age Group draft-legal races, which featured 12 additional Liberty competitors. (Due to high winds and choppy waters on the lake, the swim legs of those races were shortened, resulting in some faster times).

"I was so excited for this race because for three of our new team members, this was their first-ever triathlon," Gollnick said. "This is a very difficult race to step into for your first competition and these athletes gave it their all."

For every other racer representing Liberty, this was their first draft-legal triathlon. Freshman Jack Pizor finished third overall in the 15-19 Age Group with a time of 1:00:15.

The Lady Flames were highlighted by freshman Mackenzie Foy's third-place finish in the 20-24 Age Group in 1:07:13.

"Mackenzie had an amazing run," Gollnick said. "She entered our team with a running background and it was so fun to see her pick off the competition one by one as she moved up through the field. She was determined and you could see it on her face as she tracked down her competition. It was a very impressive effort."

"I was extremely proud of my race today and all that I was able to accomplish in support of my team," Foy said. "I was able to push myself to a new level and can't wait to apply what I learned in this race to compete again in a few weeks."

"I can't say enough about this team," Gollnick said. "We are a true family. To see the way each athlete supports and encourages one another — whether it be on the racecourse, in practice, or in their social time together — it's awesome to witness. God is building something special with our program and I cannot wait to see where the future takes this team and these student-athletes." 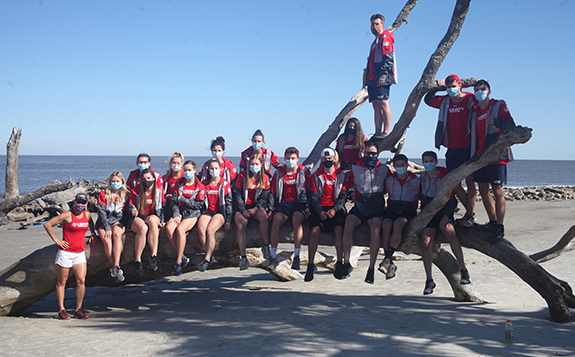 Liberty team members gathered at the beach for times of devotion and worship music as well as
testimonies and prayers on the nights before Saturday's and Sunday's races in Clermont, Fla.