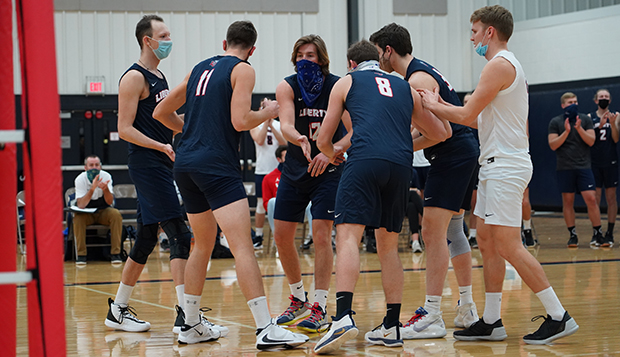 Liberty University's men's volleyball team got a sneak peek Friday night at the team it will face in Wednesday's first match in the new Liberty Arena when it traveled to Carolina University and came away with a 25-7, 25-14, 25-11 sweep of the Bruins at Williams Gym in Winston-Salem, N.C.

The Flames, who compete in the National Collegiate Volleyball Federation (NCVF), evened their record at 1-1 after losing a four-game home match against NCAA Division III Southern Virginia University on Feb. 17. Carolina, a first-year program that plays in the National Christian College Athletic Association (NCCAA), where Liberty Athletics has its roots, fell to 0-9 on the season and has yet to win a set.

Liberty dictated the flow of the match from the start of the first game, when junior setter Tommy Speelman assisted junior middle hitter Lucas Marine with a short set for a quick kill and a 1-0 lead. Speelman then went on a service run with junior opposite hitter Josh Knapp rejecting a Carolina spike with a stuff block and junior outside hitter James Morton spiking a kill. Speelman served an ace and Marine blocked a dink attempt in the middle for a 6-1 Flames advantage, prompting a time out by the host Bruins.

Reinsma finished as Liberty's leader with seven kills followed by junior outside hitter Logan Spieker with six and Morton with five while Marine added four kills and three blocks.

"We got a lot of bodies in tonight and saw some good things from guys who aren't always the go-to players," Flames Head Coach Kaleb VanDePerre said. "I was proud of the guys' focus after an easy first set. Carolina is young and they did some good things. I expect them to continue to make leaps forward with some solid pieces."

The Bruins are coached by Bill Ferguson, who led the University of Southern California's men's volleyball team to three NCAA Division I Final Fours in 10 seasons at the helm.

After hosting the Bruins on Wednesday at 7 p.m. at Liberty Arena, the Flames will welcome Lancaster Bible College in a snow-delayed match on Friday at the LaHaye Multipurpose Center, with the Division II teams playing at 6 p.m. followed by the DI squads at 8 p.m.