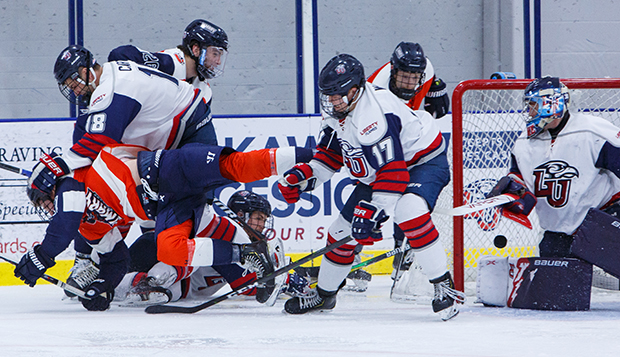 Forwards Josh Wagner (17) and Darren Carter (18) help out on defense in front of goalie Dakota Cyhaniuk in Liberty's season-opening tie with the Maurauders. (Photo by Chase Gyles)

Liberty University's ACHA Division II men's hockey team, which defeated Lindenwood University two out of three games on Feb. 19-21 at the LaHaye Ice Center, moved up in this week's national rankings to No. 2, trading places with the Lions.

Liberty tied the Maurauders, 3-3, in the season-opener before losing the last two games of the series by 3-2 and 4-1 scores, giving up two empty-netters in the final 75 seconds of Game 3.

The Flames were originally scheduled to also play Davenport in a three-game Lindenwood Showcase, but the Panthers have suspended operations due to COVID-19 protocols and no substitute team was found.

After having next weekend off, Liberty will return to ninth-ranked Florida Gulf Coast University, a team it swept Jan. 25-26 in Fort Myers, Fla.,  March 19-20 before concluding its regular season March 26-28 against a yet-to-be-finalized opponent at home. The Flames will travel to Bismarck, N.D., for the ACHA DII National Championships, hosted by Mary,from April 15-20, seeking their first national title.