Host Flames finish three and out at EIVA men's tournament 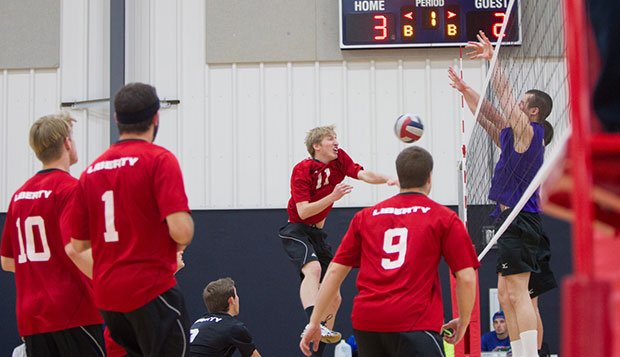 "Against Florida, they definitely stepped up, but it just wasn't enough," Liberty head coach Bryan Rigg said. "Florida's a great team. They have clutch players who have been playing longer than us. They're more experienced and when they get down, they know how to change things up. Unfortunately, we're not there yet."

However, the Flames will make a return trip to the Division I-AA national tournament, starting April 3 in Dallas.

"We're Division I-AA and all of these teams here are Division I-A, they're bigger schools," Rigg said, noting the four teams that reached Saturday's semifinals — JMU, Florida, Virginia Tech, and N.C. State — are all ranked in the top 35 nationally. "We will have a much better time at nationals. We should do very, very well. I'd be surprised if we're not in the gold bracket and getting a gold or silver medal at nationals, Division I-AA. That's our goal."

The Flames were forced to make a couple lineup adjustments for Saturday's EIVA tournament, shifting senior captain Jamie Stedjan from outside hitter to setter, where he started all of last season.

Unfortunately, he wasn't able to get the offense clicking against JMU, ranked No. 29 in the country.

"We tried to get some chemistry going and some combinations going, but they're just a solid blocking team, both of them," Stedjan said of the Dukes and Gators. "Sometimes, you have to learn to be smart hitters instead of just hitting away because when you do that, it's just going to get us deeper into a hole."

Rigg was particularly pleased with the performance of freshman libero Josiah Williams.

"He had a ton of digs," Rigg said. "He was the stud today. He was our standout player. He was digging balls left and right. We just couldn't kill the ball."

Stedjan said while Williams provided excellent defense from the back row, the front line did hold its own at times, particularly in the match against Florida, which was even more physical and athletic than JMU.

"Ethan Chase was hitting pretty well today, and Derek Abildness was, too," he said. "I was very happy I was able to get my middles going a little bit with Sam Eisenbrenner (who had a few service aces and blocks to go with his team-high kill total). We were able to find something that worked, but we weren't able to finish. That's been a big problem, finishing the game out."

Williams finished with 14 digs while Chase contributed a team-high 18 kills, Eisenbrenner led the Flames with six blocks and added nine kills, and Stedjan distributed 26 assists, including 16 against Florida. He also made nine digs, four blocks, and three kills.

Stedjan is optimistic the Flames can peak at the right time and finish on fire at the national tournament. Last year, they advanced to the silver bracket and appeared destined for the championship match, but had to leave the tournament early to catch its flight back to Lynchburg.

"We're just going to have to dig deep a lot," he said. "We were kind of in the same boat last year where our season didn't really turn out the way we wanted it to, but when we got to nationals, we really competed and played really well. Our conference is always so good, so playing against nationally ranked teams all year is only going to prepare us. We'll be very competitive. Hopefully, nationals is our time."

The Flames also have next year to look forward to with a couple blue chip recruits coming in — Mike Ragan, who visited Liberty's practice on Friday and stayed for Saturday's tournament, and Josiah Hershberger the No. 1-ranked middle hitter among public high school players in Pennsylvania.

"He's had scholarship offers from Division I programs and he wanted to come to a Christian school, so he's coming," Rigg said, noting Hershberger committed after his all-state junior season. "I'm excited. He's going to be a great, great volleyball player, an amazing volleyball player."