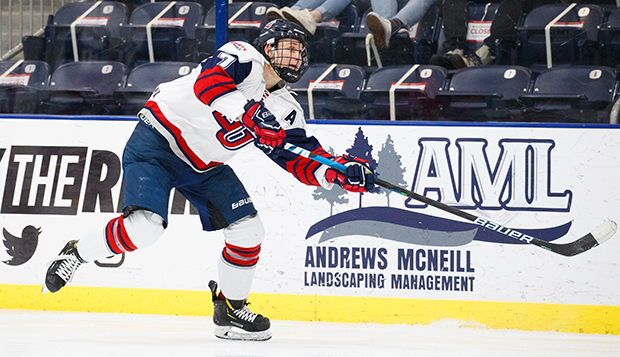 Liberty University's ACHA Division II men's hockey team, ranked No. 3 in the nation in the latest poll, won two of three games over the weekend against No. 2 Lindenwood University at the LaHaye Ice Center.

After winning Friday night's opener 5-1 and dropping Saturday night's rematch, 4-1, the Flames (8-4-2) took the rubber match on Sunday afternoon by a 5-2 final score.

"Everyone played well and battled a lot harder than last night," said Liberty senior forward Blake Flanders, who scored the game's first two goals. "It was very similar to Friday night. We won all of our puck battles and stuck it to them."

The Flames struck first at the 11:53 mark of the first period on a coast-to-coast connection from freshman defenseman Stephen Guadalajara to Flanders, who got his stick on a 150-foot outlet pass down the center of the ice for a top-shelf finish on the fly as he skated through the slot.

"The pass snuck through the defense and I just poked at it and it flipped up over the goalie and it happened to go in," Flanders said. "It was mostly luck, honestly."

"If we can score first, that's huge (because) it's tough to come back on a good team like Lindenwood," Liberty Head Coach Ben Hughes added. "They're a great team. They move the puck so well and they skate so well. They have a very high IQ team and we had to give every inch of our will today to get out on top. It was good for the guys to get the momentum, for sure."

Flanders netted the second goal just over five minutes later, controlling the puck on the outside edge of the right circle and lifting a sharp-angled wrist shot into the upper netting for a 2-0 Liberty lead with 6:16 left in the opening stanza.

Lindenwood (9-2) trimmed the deficit to 2-1 a minute and a half later when sophomore forward Josh Linn gathered a rebound in the high slot and slapped the puck past Flames junior goalie Dakota Cyhaniuk. The Lions knotted the contest at 2-2 with a power-play goal with 4:45 left in the second period when graduate forward Bobby Bross received a short pass from senior defenseman Ian Precht at the top of the right circle and skated in before firing a shot through traffic into the back of the net.

Flames junior forward Charlie Wilkie capitalized on the go-ahead goal with 16:50 to play in the third period after graduate forward Jerrell Campbell stole the puck with a poke check along the right boards in the Lions' defensive zone and skated toward the cage before passing it back to Wilkie for a point-plank putaway and a 3-2 Flames advantage.

"That gave us a lot of energy and then we finished it off from there and shut them down and got two more," Flanders said.

With 4:32 remaining in regulation, freshman forward Graznow sprung free along the Liberty and Lindenwood benches onto a loose puck inside the Lions' blue line and skated in for a one-on-one opportunity. Graznow maneuvered the puck around Lindenwood goalie Michael Errico before lifting a backhanded wrist shot into the open upper netting for an insurance goal, putting the Flames up 4-2.

Liberty killed a penalty in the final 3:22 before the Lions pulled Errico. That move backfired, however, when Flames junior forward Josh Malin, who had come out of the box moments before, rocketed a shot from the Lindenwood blue line into the open net for the final score.

"Today was our toughest win that we've had, meaning our guys played tougher than they ever have before," Hughes said. "Normally, we try to be a fast and skilled team, but the guys beared down and really played tough because they knew they had to today against a really tough and talented team."

He was surprised the Flames defeated the Lions so decisively in Friday night's opener, before penalties plagued Liberty in Saturday's rematch.

"To be completely honest, I thought that they outplayed Friday night, but we somehow got a lot of lucky bounces and Dakota (Cyhaniuk) played out of his mind," Hughes said. "He didn't have to make as many huge saves (Sunday), but he still made some incredible saves. Without him, every game is different if he's not on. He's our rock back there and I thought our PK was excellent."

Liberty has next weekend off before traveling the weekend of March 5-7 to play Lindenwood and No. 1-ranked University of Mary, which went 2-0-1 against the Flames in the season-opening series Oct. 22-24 at the LIC.

"It is a pretty good preview (for nationals)," Flanders said. "We play No. 2 this weekend and Nos. 1 and 2 (in two weeks) so you can't get much of a better schedule than that to get you ready to go to nationals."

"We're planning to go to the national tournament," Hughes added. "Especially with the rankings being different this year, the best 16 teams are going to go and that's all that matters. We're just trying to get better." 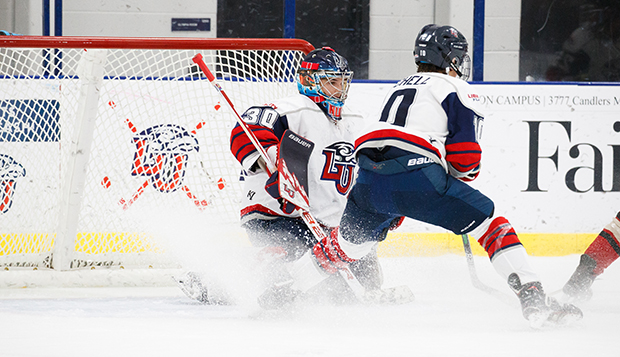 Junior goalie Dakota Cyhaniuk is shielded by junior defenseman Maxx Mitchell in front of the net.