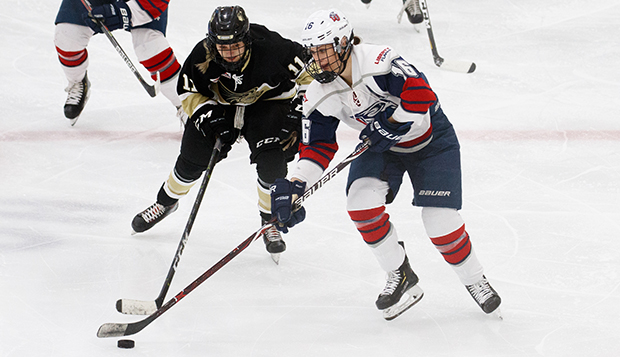 Danica Polson controls the puck in the Lady Flames' 2-0 loss to Lindenwood on Jan. 23 at the LIC. (Photo by Luke Bobbey)

Friday night's women's hockey showdown between Lindenwood University, ranked No. 1 in the nation, and second-ranked Liberty University's ACHA Division I team, the two-time defending national champion, turned into a three-round knockout for the underdog.

In a game played at the Centene Community Center, the St. Louis Blues' new practice facility in Maryland Heights, Mo., the Lady Flames (7-1, 3-1 ACHL) staged a decisive 8-1 victory over the Lady Lions (9-2), the only ACHA DI team to win three straight national titles (from 2007-10).

After splitting their Jan. 23-24 series at the LaHaye Ice Center, the rematch between the Women's Midwest College Hockey (WMCH) rivals remained scoreless until Liberty senior forward Deena Birney won a faceoff in the right circle in the Lady Lions' zone and received a return pass in the right crease from senior defenseman Dana McLeod, where she put away the game's first goal at the 4:48 mark of the first period.

Just a minute and a half into the second, Lady Flames sophomore defenseman Julia MacDonald sent a pass from behind her own blue line to freshman forward Brityn Fussy in the high slot, where she skated deep into the right circle before lifting a sharp-angled wrist shot past Lindenwood goalie Maia Busi.

With the teams playing four-on-four after Liberty junior defenseman Aislyn Stretch was called for a penalty, the Lady Flames stretched their lead to 3-0 at around the 9:00 mark when graduate forward Vanessa DeMerchant received assists from senior forward Shelby Bradford and graduate defenseman Sally Hoerr and beat Busi with a shot from the top of the right circle.

Less than two minutes elapsed before Bradford took a stretch pass from Fussy on the right wing and skated in before setting up freshman forward Linzy Jedrzejek for a point-blank finish past Busi, extending Liberty's lead to 4-0 with 7:06 left in the second period. Just over five minutes later, senior forward Alexis Lauber scored from the high point off passes from senior forward Alex Smibert and sophomore forward Yannick Truter as the Lady Flames took a commanding 5-0 advantage into the second intermission.

Lindenwood ended Lady Flames freshman Amanda Storey's shutout bid just over a minute into the third period, when Risa Shatford put away a crossing pass from linemate Dakota McAlpine from deep in the right crease. But Liberty senior forward Danica Polson won the puck along the left boards and skated in unchecked before beating Busi top shelf as she sliced into the left crease, increasing the edge to 6-1.

Then, just 40 seconds after Polson's score, Birney battled a Lindenwood defenseman for possession of the puck along the back boards and sent it to graduate forward Val Manchak, who fired a sharp-angled shot from deep in the right circle into the upper netting, widening the gap to 7-1 with 12:40 to play.

Liberty capitalized on a fast-break goal at the 7:55 mark when Truter followed her own blocked shot in the right crease and stuck the loose puck past Busi for the final score.

The Lady Flames will conclude their three-game road trip on Saturday at 1:30 p.m. against WMCH member McKendree University at its Metro Rec Plex in O'Fallon, Ill.