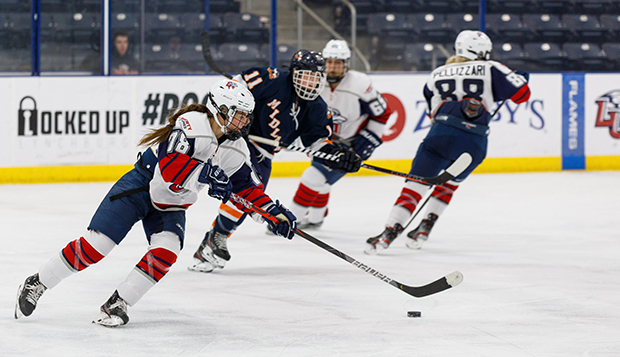 Val Manchak, shown in a Nov. 1, 2019, win over Midland at the LaHaye Ice Center, returned from injury to net the game-winner against the Warriors on Thursday. (Photo by Jenna McKenney)

Manchak's game-winner midway through the third period was typical of her physically tenacious playing style that made her Liberty's leading scorer on a 26-2 team last season.

"She forechecked and stripped the defenseman of the puck and used her speed to skate in and beat their goalie (junior Lindenwood-Belleville transfer Hannah Stone) through the five-hole," Liberty Head Coach Chris Lowes said. "We've seen Val do that last year. She has such good speed and ability to use her body to create space. We needed that."

"We're happy to have a win," Lowes said after Liberty improved to 6-1, 2-1 in ACHA play. "The game was a tight battle. Mebs' best work came in the second period, when they put some real dangerous pucks on net."

In the first three minutes of the third, Lady Flames defensemen Dana McLeod and Sydney Pierce both were called for penalties within a span of a minute, giving the Lady Warriors (6-4-2) a five-on-three opportunity for a full minute, when Mebs again closed the door with a few clutch saves.

"Outside of that, we had a couple bad turnovers that led to odd-man rushes and breakaways and Mebs stood tall," Lowes said, noting Liberty outshot Midland 57-25 for the contest. "We outchanced them and controlled possession, but they did a really good job of limiting our scoring opportunities. We put a lot of harmless shots on net as they did a good job of defending as a group, and their goalie played well."

Exactly a minute and a half after Manchak's game-winning goal, senior forward and head captain Shannon Fehr extended Liberty's lead to 2-0 by finishing beautiful tic-tac-toe passing from Manchak and sophomore forward Yannick Truter on a three-on-two break at the 8:41 mark before Truter capped the scoring with an empty-netter in the final minute off a feed from Fehr.

Lowes said Lady Flames Assistant Coach Justin Forth's shuffling of the forward lines after the second period was critical to their third-period scoring success, with the combination of Fehr, Manchak, and Truter producing all three goals.

"We weren't creating much and Forth mixed up the lines," Lowes said. "Sometimes you just need a spark, and that was a good call to shake things up. It sparked something in them which was very encouraging to see, and hopefully we can build on that tomorrow."

"That is a 1-2 matchup, so our girls will be excited to play another high-caliber opponent," Lowes said of the Lady Lions, who have dealt Liberty, the two-time defending ACHA DI national champion, its only three losses over the past two seasons.

On Saturday, the Lady Flames will return to McKendree for a 1:30 p.m. battle against the home Bearcats (1-1), who only lost their Feb. 6 season-opener to the Lady Lions by a 2-1 final and will host Midland on Friday. McKendree and Midland are tied at the No. 5 spot in the ACHA rankings.

All three of the Liberty contests are against Women's Midwest College Hockey (WMCH) opponents in what could serve as a preview for the WMCH Championship Tournament, set for March 26-28 back in the St. Louis area. Liberty won last spring's inaugural WMCH Championship, played at the FSI Sharktank in St. Louis.